Well kids, here comes what you have ALL been waiting for: the gruesomeness!!!

That's right, it's finally time to screw around with our stable group of superheroes, and let horrible things happen to them in favor of shock value!
Issue 18 opens with... 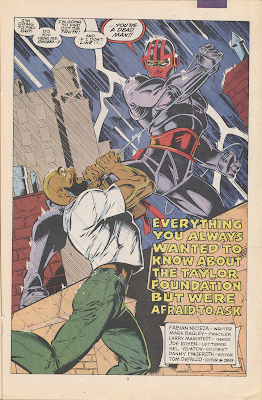 Dammit Thrash! I know it worked with Rich, but that doesn't mean that you can make everyone else fly!
Okay, jokes aside: After taking a look at some of the Taylor Foundations files (it's the conglomerate owned by Thrash, which he use to sponsor the New Warriors) Thrash discover that the foundation has made many questionable deals, and has been involved in illegal activities for at least 5 years, such as corruption, money-laundering and more.
This comes as a shock for our Thrash, who confronts Chord about this, but Chord manege to escape. Chord contacts the other New Warriors, and tell them that Thrash has gone bonkers (showing them the marks of Thrash's grabbing-hook on his neck helps convincing them) and when Thrash gets to their base, they attack him. After Thrash finally makes the Warriors listen to him long enough to prove that Chord is the one who has a lot to answer for. And then... This happened: 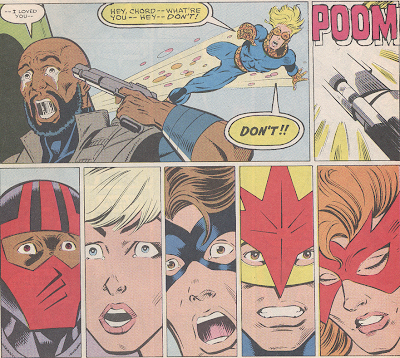 Wow... Dark...
I would like to ad that it would have been easy to just show a group-shot of all the Warriors looking shocked, but instead, we see their different reactions to what I believe must be the most horrifying things you can be a witness to.
Nita and Marvel Boy are shocked (well, duh), Nova grinds his teeth, Firestar has a "not again" look on her face (Emma Frost does that to you), and Thrash looks damn scared and confused.
In fact, this issue is the one where we for the first time see Thrash, with a lack of better word, showing vulnerability. In the most of the series, he has worked like a robot, besides some berserk mode from time to time. But here we see him being confused, scared, and we even see him cry when he figured out what the Taylor Foundation has been involved with. 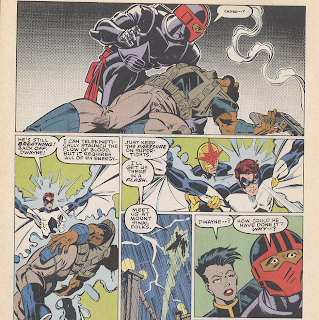 Against all odds, Chord is still alive, but barely. Marvel Boy manege to stop the bleeding with his telekinesis, so Nova can fly him to the hospital.
Obviously, Chord can't tell them anything now, so Thrash must find his answers elsewhere. He starts with a company who has made several dirty deals with the Taylor Foundation; Ophrah Industries.
I KNEW Winfrey was evil! She probably has an alliance with the cows!
... Oh wait, her name is spelled Oprah. My bad.
Ophrah is a company owned by the mutant Gideon. Besides having financial might (and ridicules hair) he is quit powerful. He is immortal, and like Rouge, he can duplicate powers. But unlike Rouge, he has no need for physical contact to gain them. All he needs is to be near them. So when the Warriors try to attack him at his home to get the information they need... Well... 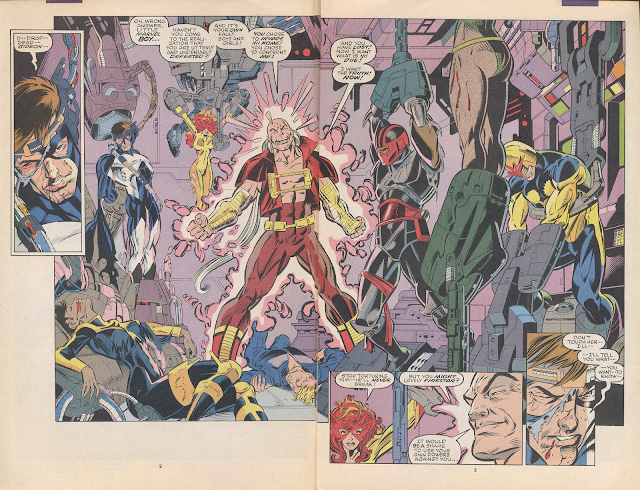 It didn't go very well.
This is the Warriors first defeat, and they were lucky (?) that it was to a mustache-twiddling villain.
After torturing the Warriors for some time, Gideon let them go, after they admit that by attacking him unprovoked, and breaking into his home, they were just as bad as him.
I dont like issue 19. Not because its poorly written (by the way; its not), but partly because I think that the whole "breaking in illegally to get the job done" is a little out of character for the Warriors. That, and that I'm not very found of seeing my heroes being tortured. I'm weird like that.
What's that? Its not dark enough for you? Don't worry, its getting worse!
The Warriors travels to Japan to continue their investigation, but Vance and Nita has midterms and has to stay home. Vance father, home after a business trip, is furious now that he has figured out his son is still playing superhero, and start beating his son. Vance gets scared, and try to defend himself with his telekinesis. 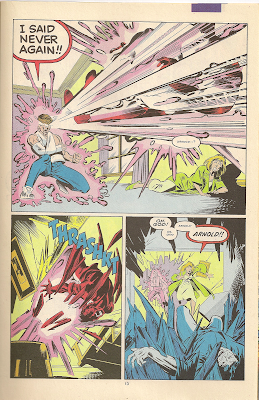 Vance gets arrested by the police for aggravated assault, and when his father dies in the hospital, murder.
Meanwhile, the Warriors are in Japan, busting a group of heroin-smugglers who works for someone named Tatsu, a man who are connected to the Taylor Foundations illegal activities. After fighting his squad of Cybersamurais (I know, lame) Tatsu realize that he is going to lose, and offers the Warriors a deal: He will tell them all they need to know about the Taylor Foundation, and in return, they will "leave Japanese affairs to the Japanese."
Thrash accepts, arguing that they can’t arrest Tatsu without any authority in Japan, and they can’t drag him to the United States. They might as well benefit somehow.

The rest of he Warriors (with the exception of Nova, surprisingly enough) feels different about the situation. Thrasher is overcome by how his life is falling apart, snaps, and declare that he not only quits, but also disbands the New Warriors.
With information from Tatsu, Thrash continue his investigation alone, but soon he meets a group named the Folding Circle, who attacks and kidnaps Night Thrasher, claiming that he is going to be their final member in their hunt for truth. 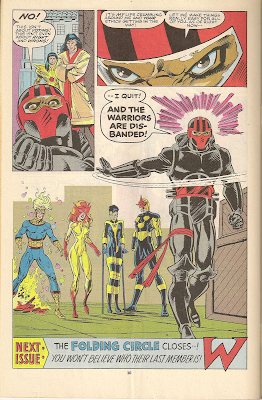 Well, that was New Warriors issue 18 to 21. The tone has suddenly changed, huh?
Well, the series was now a year and a half old, so I guess it was time to shake up the status quo. And the series probably needed a little darker tone to keep selling in the Dark Age Of Comics, where grimness was the fashion. Grimness, and weird-ass, over-complicated mysteries that nobody cares about, with "mystery-villains." Speaking of which, next time we shall dive into the 5 part story-line: Nothing But The Truth.
I'm Waezi2, and thanks for wasting time with me.
Posted by Waezi2 at 3:36 PM