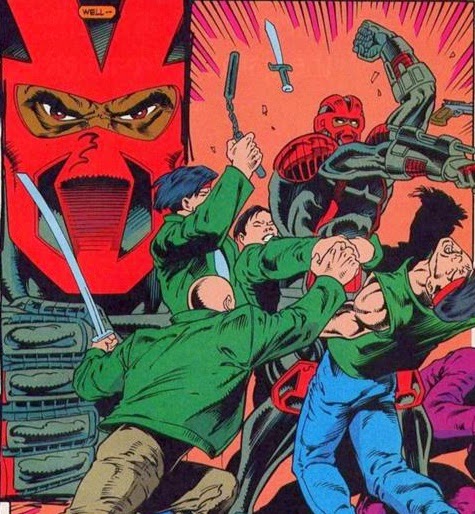 Today, we are going to talk about possibly one of the least appreciated superheroes ever: Night Thrasher. Allot of people think of this guy as a lame Batman-ripoff, and to a degree, he kinda is. He is a multimillionaire who swore to avenge his parents by fighting criminals. But besides that, there are plenty of differences between him and Batman. Night Thrasher wears a very advanced armor, he is much more hot-headed, he uses a skateboard(Shut up! It's NOT lame!) and most importantly of all: he didn't fight crime alone. He realized that if he should stand a chance in a world full of super-humans and AIM technology, he had to gather allies, so he formed the New Warriors, my favorite superhero team (you can read about the New Warriors HERE). But this series is actually about Thrasher working alone. He has taken a leave of absence from the Warriors to get a hold of his at the moment very chaotic life, after learning that his company has been corrupted for years by his old sensei Tai, who by the way is also the murderer of his parents(long story). But it's not going to be a holiday for Thrash, for someone has kidnapped his legal guardian Chord. And just to make maters worse, Chord is in need surgery in less than three days, or he will die. 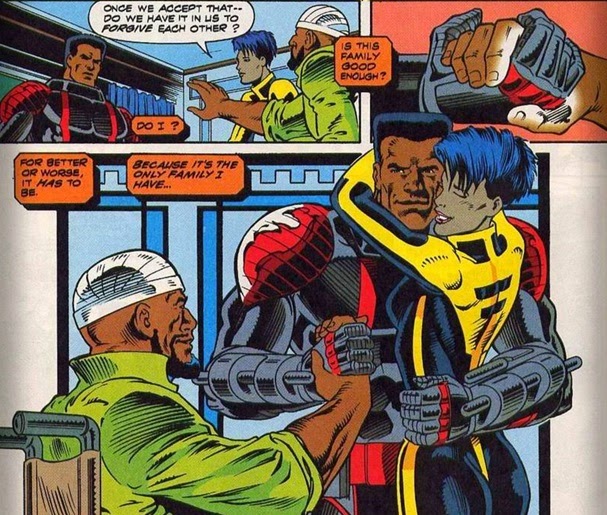 This is a spin-off series of the New Warriors VOL 1, so you will probably enjoy it a lot more if you have read the New Warriors series first, since there is a lot of referring to past events. The first issue is pretty average, but besides that, it's an all in all well told story. It's enjoyable to see Thrash move away from being an angsty, hot-tempered Punisher-wannabee, and that he finally becomes an adult with control over his life.

The art is gritty, but not in a bad way, and we have a lot of action. My favorite issue must be issue three, where Thrash must face the super-powered corporate-shark Gideon, both in combat as well as the financial world.
If you are a fan of Nicieza's run on New Warriors, or you just want to read about a ass-kicking guy in an awesome battle-armor full of gadgets, then this is a must-have.
That's all for now. I'm Waezi2, and thanks for wasting time with me.
Posted by Waezi2 at 4:09 PM