"Blood Lad" is at the moment my favorite manga-series. Even though I'm not too happy about the events in the fifth omnibus(not so much because of the quality of the story, but because I fear that it's going Dragon Ball now) it's still one of the most enjoyable comics in my collection. So even though it may not be that gory a manga(though it DOES have some pretty bloody moments), I still think it's Halloween related to some degree, since it has vampires, werewolves and that kind of stuff.
But before I name my top 7 moments of my favorite manga-series, I better give you the skinny:
Staz Blood is a vampire with a obsession for human made things, especially if they are from Japan. But he lives in the Demon World, and getting to the world of humans is easier said than done. But one day, a human girl named Fuyumi Yanagi enters the Demon World by accident. And she is not just human! She is JAPANESE!!! Staz instantly falls in love (or at least lust) at first sight. But not long after meeting her, Fuyumi gets killed, and is transformed into a ghost. This is a bummer for the young otaku vampire, since she is no longer a creature of flesh, so all attraction toward her is gone. However, Staz swears to Fuyumi that he will make it his lives goal to get her back to life (so he can suck her blood, and make her part of his collection) and this is the start of a amazing journey for the two of them.

Alright then, let's start with... 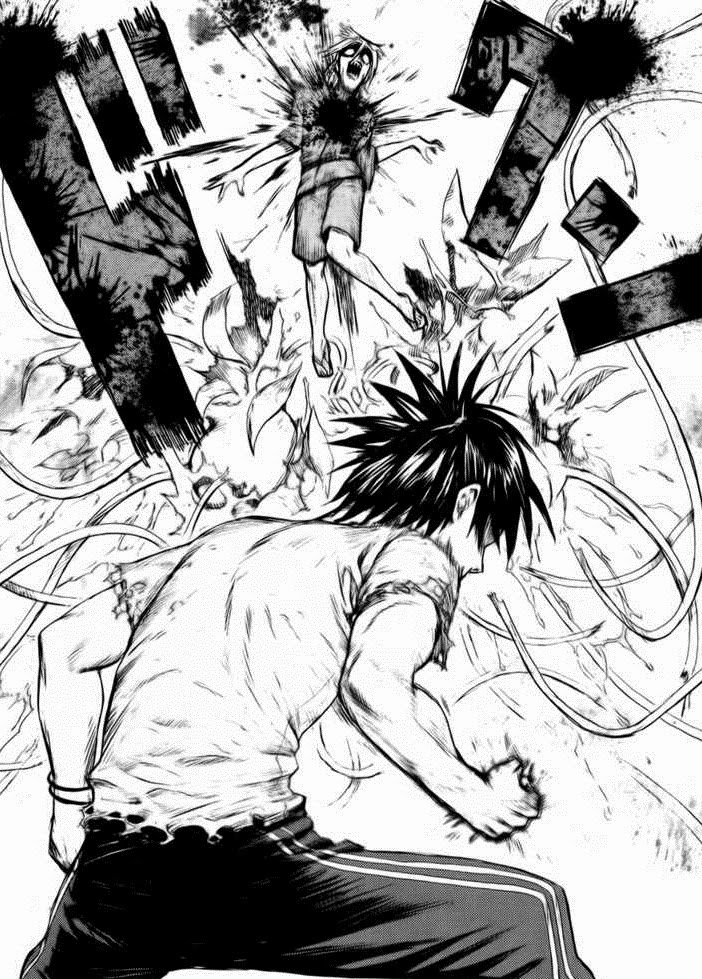 Number 7: Staz kills the Plant Seller.
Staz is a territory boss, which means that he is in control of a small area of the Demon World. So from time to time, a demon comes to his territory, hoping to kill him, and become the new boss. One of these challengers is a plant seller, who controls an army of man-eating plants. He is however no treat to Staz at all, and the Plant Seller is killed off, when Staz uses his demonic powers to crush his heart.
And this is where I realized that Staz is not a hero at all. Or at least not a typical manga-hero. The the Plant Seller was no treat AT ALL, but Staz kills him anyway! Not very heroic, is it?
But that's what makes Staz so awesome; He's an ASSHOLE!
He never had to work hard for anything, since he was born powerful. He is lazy, almost never takes responsibility for anything, and is completely merciless in battle, even when his opponents are unable to fight him. He is the perfect manga anti-hero, and the killing of the plant seller is a good example. 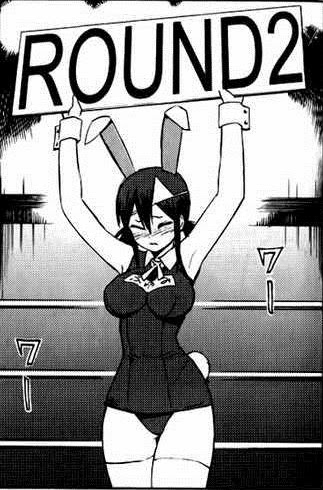 Number 6: Fuyumi as "ring girl."
On his quest for Fuyumi's resurrection, Staz makes a bet with his old friend; the werewolf Wolf. If Staz win, Wolf has to help him find a book called "The Book of Human Resurrection." But if Wolf win, Staz promise him Fuyumi(another example of how big a prick he really is). Staz plans to use his long-distance magic in order to cheat in a bowling mach against Wolf. But he ends up having to box with him instead, since Wolf pulls a pretty ingenious(if anything a bit overkill-ish) trick on him. Fuyumi is then, much to her dismay, given a bunny-girl outfit and told that she will be the fight's "ring girl."
There is something absolutely adorable about seeing the poor girl walk around in the ring, embarrassed over wearing a sexy costume. She looks WAY to innocent for the role as eye candy for a boxing match. 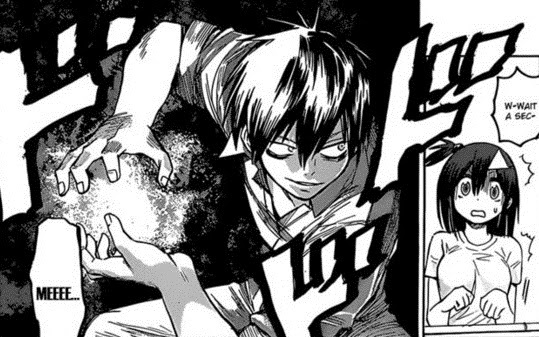 Number 5: KamehameWHA?!
During a fight against a monstrosity called Akim Papradon, Staz does what ALL of us at least ONCE did as kids; pretending to do a Kamehameha!
I literately cracked, realizing what Staz was about to do. This is quite possibly one of the funniest moments in Blood Lad. It's only in Staz's otaku brain that mimicking your favorite manga-hero's signature move during a life-or-death situation is a good idea. But then again; if any of us had energy-based powers of a sort, wouldn't we do that as well? Staz is just living the dream of nerds everywhere. 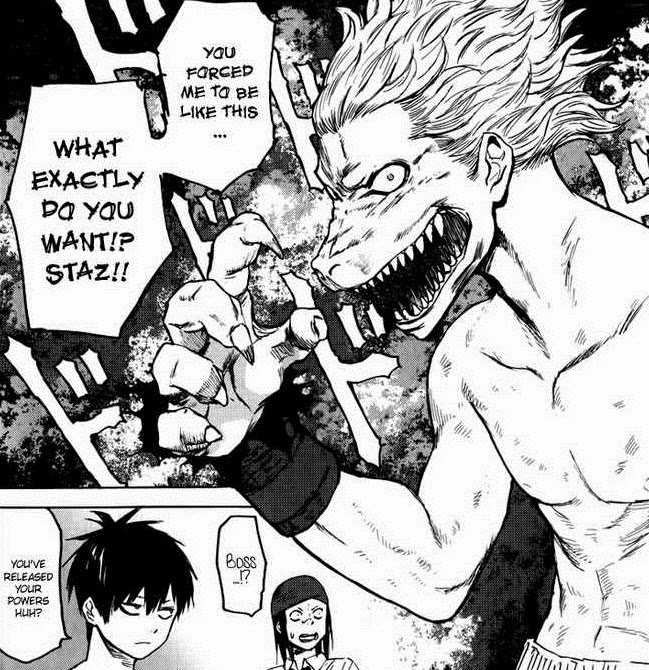 Number 4: Wolf's half-way transformation.
This is another moment from the boxing mach between Staz and Wolf. During the fight, Staz finally gets the upper hand after a sever beating. Wolf, realizing that he is about to lose, transforms into werewolf form(or halfway, since he is low on juice).
Besides the fact that Wolf looks totally awesome(!), it's also one of those shit-just-got-real moments. A stupid cock fight between these two friends takes a sudden turn, and we are once more reminded that these guys are monsters. They are cruel creatures who, without any remorse, kills in order to solve a problem, and their ancestors has traveled to the Human World for hundred of years in order to suck blood and feast on flesh. Heck, Staz almost killed Wolf, his best friend! And that was just for insulting him! 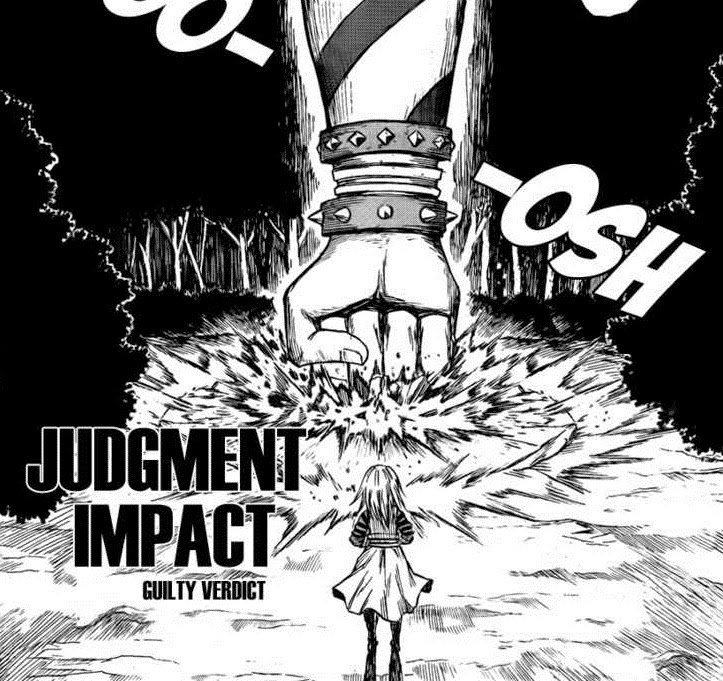 Number 3: Judgment Impact!
My favorite character in "Blood Lad" is Staz's little sister; Liz Blood.
Try to imagine Ronan The Accuser as a ten year old girl. THAT'S Liz Blood! She is in command of the Demon World prison, and has authority to punish anyone as she see fit. Her most powerful attack is a curse called "Judgement Impact." It summons a gigantic fist from heaven, and smash directly on whoever she has judged "guilty." That person is then teleported into the infamous prison known as "Liz's Toy Box."
... I know it's probably never going to happen, but I would LOVE a Blood Lad video-game, so that I could use this bad-ass attack of my favorite manga character. 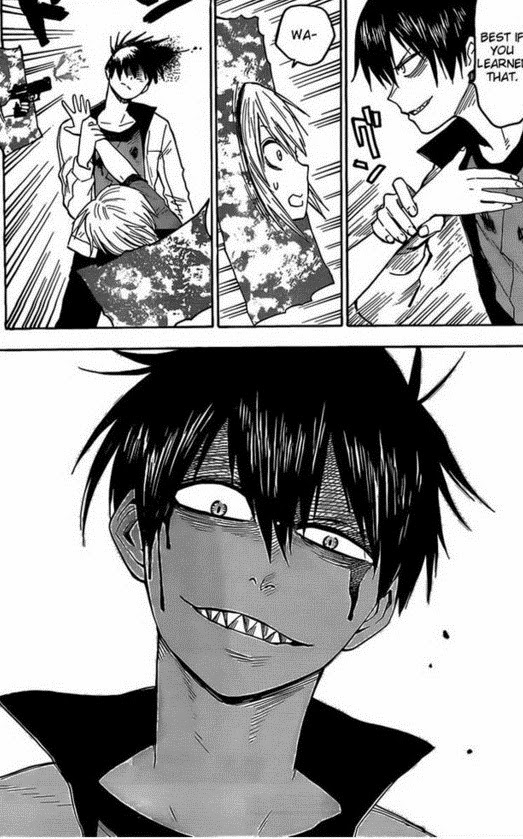 Number 2: Staz is shot through the brain.
Holy crap, that's so awesome! 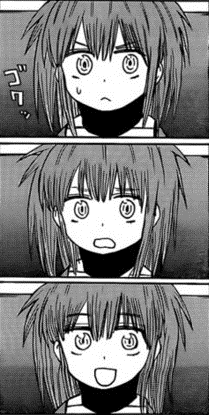 Number 1: Liz watching "Castle In The Sky."
This is from chapter 19 in book 3, which is also my favorite chapter. It's not that action-packed, nor is it the funniest. But it's just so... sweet and cute.
Being responsible for law and order in the Demon World, Liz is a very feared vampire, and if people aren't running in fear seeing her, they suck up to her instead. This, and knowing that her brother Braz loves Staz more than her, has made he a very angry, very lonely little child. So it's nice to see her doing something fun and innocent, like watching the movie "Castle In The Sky." And without her ax and Jason Voorhees mask, she is simply too adorable for words!

And that was my top 7 Blood Lad moments. Next time, I will have some more recommendations for Halloween reading, including "King Artur VS Dracula".
I'm Waezi2, and thanks for wasting time with me.
Posted by Waezi2 at 5:13 PM