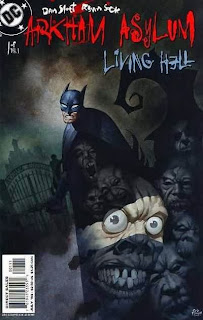 Warren Withe, a crooked financier, claims to be insane in an attempt to evade jail. But he learns quickly, that in Gotham City, you are better of in the slammer than in the nuthouse. Withe is in for one hell of a ride, as he meets the most disgusting creatures on the planet first hand. But can he survive the living hell, or will he be consumed?
The day I get tired of reading about Arkham Asylum is the day I get tired of life. This is the greatest tale I have read about Arkham AKA hell on earth. The place that not only contains cruelty and madness, but gives birth to it as well, as we see in this series.
Oh, and it has demons, too, for some reasons... 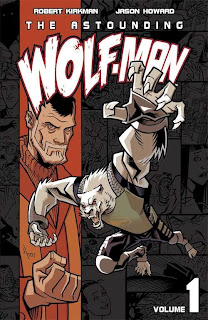 The world is cruel and unfair: The Astounding Wolf-Man only lasted 25 issues!
Oh, and something about people starving and stuff...
Gary Hampton has it all: Beautiful wife, loving daughter, good job, and he can afford anything they need and want. But then he gets attacked by a werewolf, and... well... the writer is Robert Kirkman who is also the writer of Invincible and Walking Dead, so needless to say, his life is not going to be full of joy.
It's a damn shame that this series was so short-lived, it's my favorite Kirkman comic. And I love the art done by Jason Howard. I haven't seen other comics drawn by him besides Wolf-Man and (dear God NO) Super Dinosaur, but I hope I will.
Highly recommend.
Posted by Waezi2 at 4:44 PM