The quest for lost comics: A handful of issues.

Today, instead of a review of an entire series, we shall take a look at a handful of comics I brought recently. One of them is the first issue of Green Lantern Quarterly. 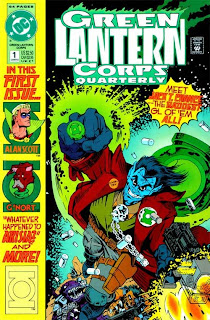 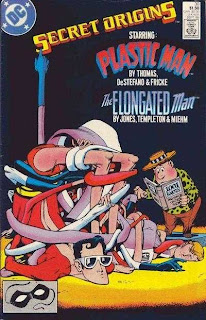 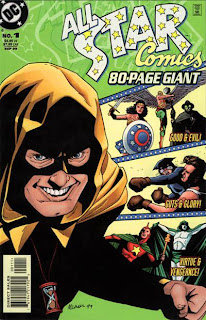 It was a short lived series with focus on the members of the corps. In the first issue, we get introduced to Jack T. Chance, the most 90s GL of them all. He is the only GL on the corps who are allowed to use lethal force, since he works at the most violent sector of them all; Garnth, better known as Hellhole. And sometimes, you have to send a bad man to take care of bad men.  And Jack is a “good” bad man. The story is very 90s like, and the artwork is repulsive. In a good way.

We also have some other Lanterns introduced, like Gnort, Arisia, and even Alan Scott, the golden age GL.

You will probably like it more if you are fan of the Green Lantern concept to begin with, but it is a fine little collection of stories, and I will see if I can find the other issues.

And I also have issue 30 of the series Secret Origins.

Secret Origins were a series made after Crisis On Infinite Earths, who were suppose to explain the origins of DC Comics heroes and villains. In this issue its about two very different, but also pretty weird heroes: Plastic Man and Elongated Man. The story about Elongated Man weren't really a origin, but a retrospective on the life of Ralph Dibny. Nice little story about a man who wants attention. Loved it!

And The story about Plast weren't half-bad either. If all the other issues of Secret Origins are just as good, then I will look after them as fast as possible.

And Finally, All Star 80-Page Giant.
Did I mention that a flipping(!) love the JSA? I do.
All Star 80-Page Giant were a one shot comic with a bunch of stories about the members of the weary first superhero team, The Justice Society of America.
The first story is written by the ever awesome Mark Waid(my favorite writer) and is about the Atom, a midget superhero, and his problems with his short temper. My favorite story must be the one about the golden age Wonder Woman(queen Hippolyta) who teams up with Phantom Lady and Liberty Bell to fight some Nazi spy's. But all the other stories are great to. The weakest one must be the fight between Hourman and the 90-Minute Man, but it is still enjoyably.

All Star 80-Page Giant is without a doubt the best of my recently brought comics. I highly recommend it.

See ya next week, were we will take a look at my mothers favorite superhero, The Phantom.
Posted by Waezi2 at 4:13 PM