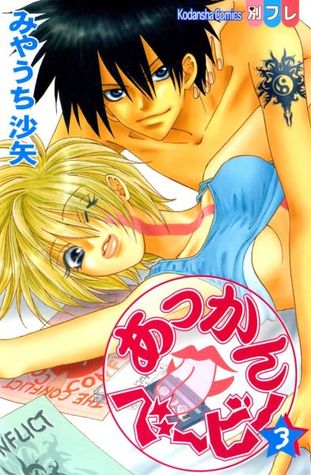 "Akkan Baby" is the story about the two teenagers Yuki and Shigeru. They are both young, very naive, and are just plain idiots. Seriously, they believe that condoms are some sort of candy. In other words, they are two people in the world who should NEVER have sex with anyone.
But unfortunately, the two morons do it with each other allot. Hell, they even compete when they have sex. They are not even dating, they are just two headbangers who are best friends because they are fan of the same band.
So because they are both boneheads, they are shocked realizing that Shigeru is pregnant. Yuki and Shigeru must now face the consequences of their actions, and decide to whatever keeping the child or getting a abortion.
First of all, I would like to comment the manga for telling us repetitively that pretty much EVERYTHING the two of them do is... well, WRONG, and that they are NOT role-models at all. But that is also what makes the manga kinda cute. The two of them does a lot of idiotic things, but they not have a bad bone in their body, and often act on pure intentions. It's basically the story about two very confused teens who get a very serious matter slammed into their face. And you bet your ass the manga let you understand how serious a matter it is. But it still doesnt answer the main question: is it a good manga?
Well, I liked it. I honestly think the situation seams pretty realistic, beside it having manga effects like extreme faces, overreactions and stuff like that. The pregnancy is by no means a cakewalk for Yuki and Shigeru. They must face their parent, and be denied access to school.
"Akkan Baby" has this odd combination of seriousness, silliness, sadness and comedy that only manga can give you. I laughed and cried reading it when I was 17 years old, and it still moves me. It may not be for everyone, but I would recommend it.
Oh, and if anyone reading this is under 18: PLEASE, FOR THE LOVE OF GOD; DO NOT HAVE SEX! IT'S NOT ENOUGH THAT YOU USE PROTECTION, IT's STILL RISKY!!!
One down, 5 to go.
I'm Waezi2, and thanks for wasting time with me.
Posted by Waezi2 at 1:08 PM