Before we start, I would like to add that we won't look at ALL the 75 issues of New Warriors, but the first 26. Not because there is anything wrong with the 49 other, but because its the ones that is collected in the omnibus, that I have heard has been published recently. And I want to go back to making 5-panels, and work with my Ads Of Agony. And it would also take forever, and you would probably have lost interest. 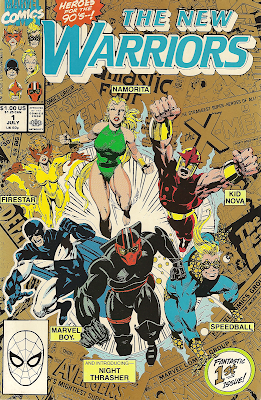 A lot of team books has a cover with the team members posing, or running at us. But instead of that, the New Warriors are BURSTING trough first issues from different series. AWESOME!!!
And they are all here; Firestar, Marvel Boy, the new hero Night Thrasher, Speedball, Namorita and... Kid Nova?
Yeah, I don't know why they call him that on the cover, they never called him that in the comic(I think Speedball did once like a kind of joke). But besides that, it's actually a pretty damn good cover, it captured my eye when I first saw it, and made me buy the comic, simply because I looked awesome aqnd colorful, and I thought that the costumes were pretty cool.
But let's get to the actual story. Remember what I told you about Nova losing his powers? He actually contacted the Fantastic Four in hope that Mr. Fantastic could somehow restore them. After some studies of Rich's body, he discovers that he didn't lose the Nova Force, it were still inside him, but inactive. Night Thrasher, an armored superhero, makes a theory, after hacking the FF’s files, that an adrenaline rush might reactivate the Nova Force in Rich Rider as a knee-jerk reflex. 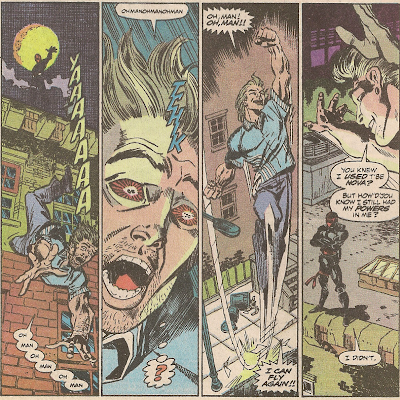 Yeah, Thrasher is kind of a jerk like that. It’s actually an important aspect of his character. He is brilliant, but prefers “act first, think later” methods. Needles to say, Rich were kinda pissed, and had for a long time a grudge against Thrasher. But hey, it worked, so Rich agreed to form a group with him, if nothing else just to keep an eye on him. 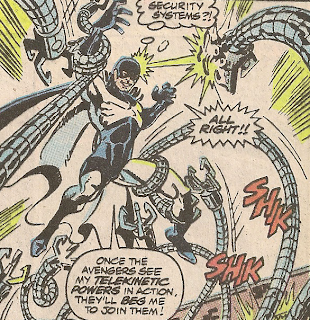 And here we have Marvel Boy, who wants to impress the Avengers, so they would ask him to join the team. He does so by breaking in to their private property, more specifically the mansion.
Despite this pretty childish (and very illegal) attempt to impress the Avengers, I would like to add that Marvel Boy is in fact actually pretty smart. He has close to encyclopedia knowledge about pretty much anything superhero related, and can name how many super-humans there is in New York... But he can sometimes be kind of a dumb-ass. 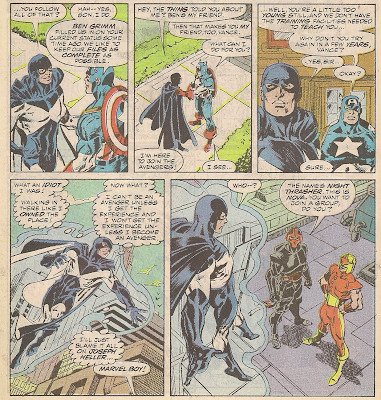 After getting his butt saved from the security system by Captain America, Cap tells him that he has only heard good things about him from the Thing, but that the Avengers prefer more experienced heroes. That, and being over 18 helps. But after leaven the Avengers mansion (slightly embarrassed), Marvel Boy gets stopped by Night Thrasher and Nova who offers him a place at their new team.
Kinda odd when you think about that the same guy who threw a guy down from a building to test a theory is all like: "Hey you! Yeah you! Wanna join our vigilante group?" 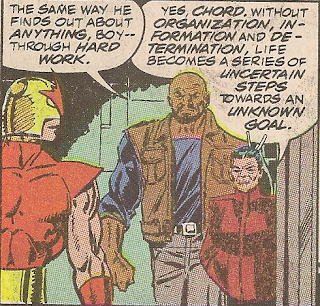 We learn the Night Thrasher is in fact an extremely wealthy young man named Dwayne Taylor. His parents were killed by criminals, and he has sworn to fight crime and make all criminals pay for what they do to society.
… Yeah, okay, I admit it! He is a Batman rip-off! But if you ask me, he is an improved one. Besides the obvious that he wears a million dollar battle-suit instead of spandex, he also realize that fighting a one-man war against crime, alone in a world with superpowered humans and A.I.M. tech is suicide. And that is why he is gathering a group. We also get introduced to his legal guardians: Cord, the love child of Alfred Pennyworth and Mr. T, and Tai, the stereotype Chinese old lady, who can say whatever the heck she wants, and it would still sound like wisdom because she speak fluent fortune cookie. 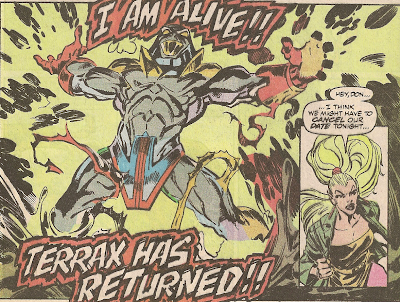 Meanwhile, the former herald of Galactus, and a old enemy of the Fantastic Four named Terrax starts to run amok in Queens, but Namorita is there to fight the depowered, but still very powerful Terrax.

While this is happening, Thrasher has “asked” Firestar to join the team. And by asked, I mean threaten her with exposing her identity… Our hero, everybody! He blackmail people to get his will! 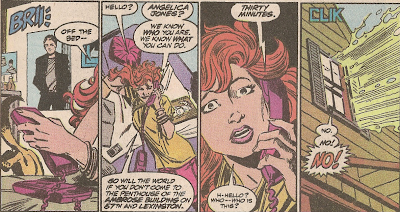 It's needless to say that Angel doesn't take it very well.
But before the very peeved Firestar can rip Night Thrasher a new one, the group, who are soon going to be known as the New Warriors, notice the earthquakes from Queens, made by Terrax, and they take off to face the menace.
They actually do pretty well against Terrax (again, I will remind you that he is depowered at the moment) and here comes the panel that made me truly understand how awesome a comic-book series I had brought: 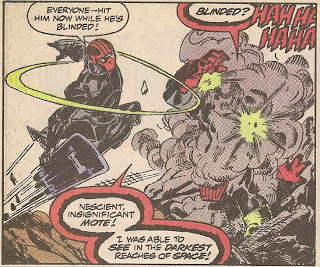 Night Thrasher fighting Terrax on a skateboard! HELL YEAH!!! My inner 90’s kid is playing air guitar right now!
As far as I understand, allot of people makes fun of Thrash for his skateboard, and say that it makes him ridicules. To them, I have this to say: I don’t care how stupid you think it is. THIS is the Marvel U, were you can use a shield as a weapon, a guy with a bow is somehow more effective than one with a gun, and magic can’t cure bullet wounds. So let Thrasher have in skateboard I say! 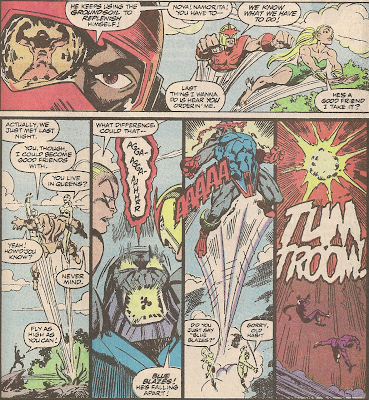 After fighting Terrax for some time, and Speedball joins the battle, Night Thrasher figure out that Terrax needs to be in contact with the ground, since this is just a temporary form made by earth. So after Thrash orders Nita and Nova to crab him and fly him above the ground... Terrax explodes... Because that’s apparently how it works. Science, ladies and gentlemen!
After the Avengers FINALLY joins the scene (Dude, what the heck?) and unintended takes all the glory, Night Thrasher says “screw them!” and suggest that the six of them form their own team and focus on the kind of crime that the Avengers usually don’t touch. They all agree, even Nova, who are still kinda peeved over getting thrown down from rooftops, and they take the name the news-reporters used to describe them; New Warriors. And thus a legend was born!
… A legend Mark Millar used as cannon fodder in Civil War… yeah, I’m still pissed over that. That was issue one of the first New Warriors series, and I has to say; It's starting out pretty well. First of all, it has great art by Mark Bargley(long-time Spider-Man artist) and it's very colorful. The fight with Terrax is well executed, and even though we only have seen very little of the characters as individuals, we sense that there is some character building coming. Thrasher, besides being an ass, is a great straight man with his "strictly business" attitude, which is exactly what this bunch of inexperienced and very mixed group of teen-heroes needs to become a functional team, if you ask me.
Bravo Fabian Nicieza!

I'm Waezi2, and thanks for wasting time with me.