When you are a superhero, you will eventually end up in space. Issue 5 to 6 is the story about the New Warrior's first trip. 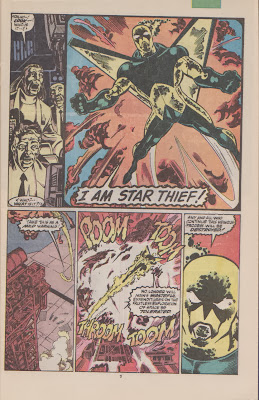 A superhuman named Star Thief has appeared, and he sabotages space launches. It gets the attention of the New Warriors, who decides to do something about it. But they also learn hat the rocket that Star Thief wants to stop carries hazardous wast chemicals from Stane-International, so even though they are trying to stop Star Thief, they can,t let the rocket leave Earth either.
During the fight with both the Stane-Internationals security mandroids (mandroids, GOD, I LOVE COMICS!), and Star Thief, the rocket gets fired off, with Namorita, Firestar, Marvel Boy and Star Thief on it. And its aimed at the moon. 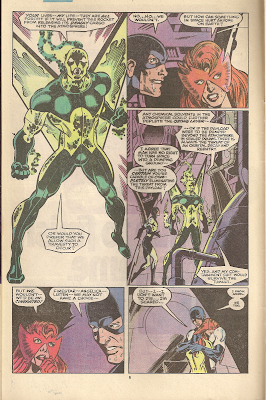 Nova is less than happy bout his teammates getting send into space in a flying chemical trashcan, and after a little "chat" with the project coordinator at the space facility, we learn that the rocket isn't just a way to get rid of the chemical waist for Stane-International, but also to attack the Inhumans who live on the moon in the city Attilan. Stane is interested in the Inhumans advanced city and it's technology, and therefor wants them out of the way so it can be studied (have anyone noticed that the not-stupid geniuses in the Marvel Universe is the evil ones? Just saying).
Meanwhile, there is problems on the rocket. It weren't meant to have passengers on it, and it gets worse when Star Thief claims that the rocket must be destroyed before it pollutes the atmosphere. But luckily, they are saved by the dog-like Inhuman Lockjaw, who has the power of teleportation. But the rocket is still flying at to moon. 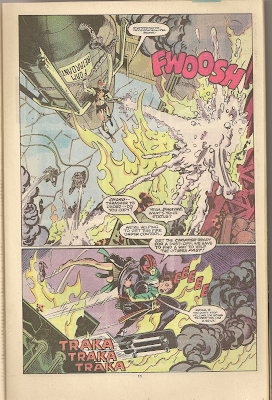 Nova, Speedball and Night Thrasher can't come to get their teammates back to the planet, because a fire has started at the space station , so they must help the Stane-Industry mandroids (mandroids, freaking awesome!) with stopping the fire and saving the workers on the station.
Meanwhile, Star Thief has gone berserk on the Inhumans because of his spacephobia, but after trying to attack the Inhumans "neighbor" the Watcher, he is subdued. The Watcher lets him see a peek of the infinite universe, and Star Thief realize how little Earth is compared to the rest of the universe and that exploring space is necessary.
Star Thief, is finally calm, and just in time to save the moon with Black Bolt and Firestar by incinerating the rocket before it can reach the moon. Firestar, Marvel Boy and Nita gets teleported home with Lockjaw, but Star Thief stays with the Inhumans so he can try to rediscover his humanity (because finding you humanity among the INHUMANS makes perfect sense:P). This is a pretty kick-ass story. Half of the heroes are in space, assisting in the rescue of the moon-city Attilan, and the rest of the team are firefighting, and we have them team-up with bout the Inhumans and freaking mandoids(!) in the two issues. Too bad I cant say that about what comes next.

This time, a Vietnamese assassin named Bengal seeks revenge on a priest named Janes. When Bengal was a boy, all the people in his town were slaughtered by American soldiers, with the exception of Bengal, who would train in the art of killing, so that he could avenge his town. Janes is next on his list. Luckily, Silhouette knows the priest, and gets Night Thrasher to help. But then the Punisher appears too. He's after Sil, because he believe she still has connection to her brother's gang in China Town, so after taking care of Bengal, Thrash has to fight the Punisher too.
Yeah, it was kind of awkward for the Punisher once he realized that he had made a mistake...
And we finally learn that, like Midnight's Fire, Silhuette has powers too; she can melt into shadows and teleport trough them.
Meanwhile, the rest of the team has gone to Brazil. Speedball's mother has disappeared with her nature organization; Project: Earth. After searching in the rain-forest for an eternity, we find Project: Earth, and discover that they are actually a group of terrorists (Speedball's mother didn't know that.), and that they have a group of super-powered individuals who are going to do all kind of nasty-wasty stuff to the Brazilian government, so it can serve their course... somehow. This super-powered nature activists are called: THE FORCE OF NATURE! 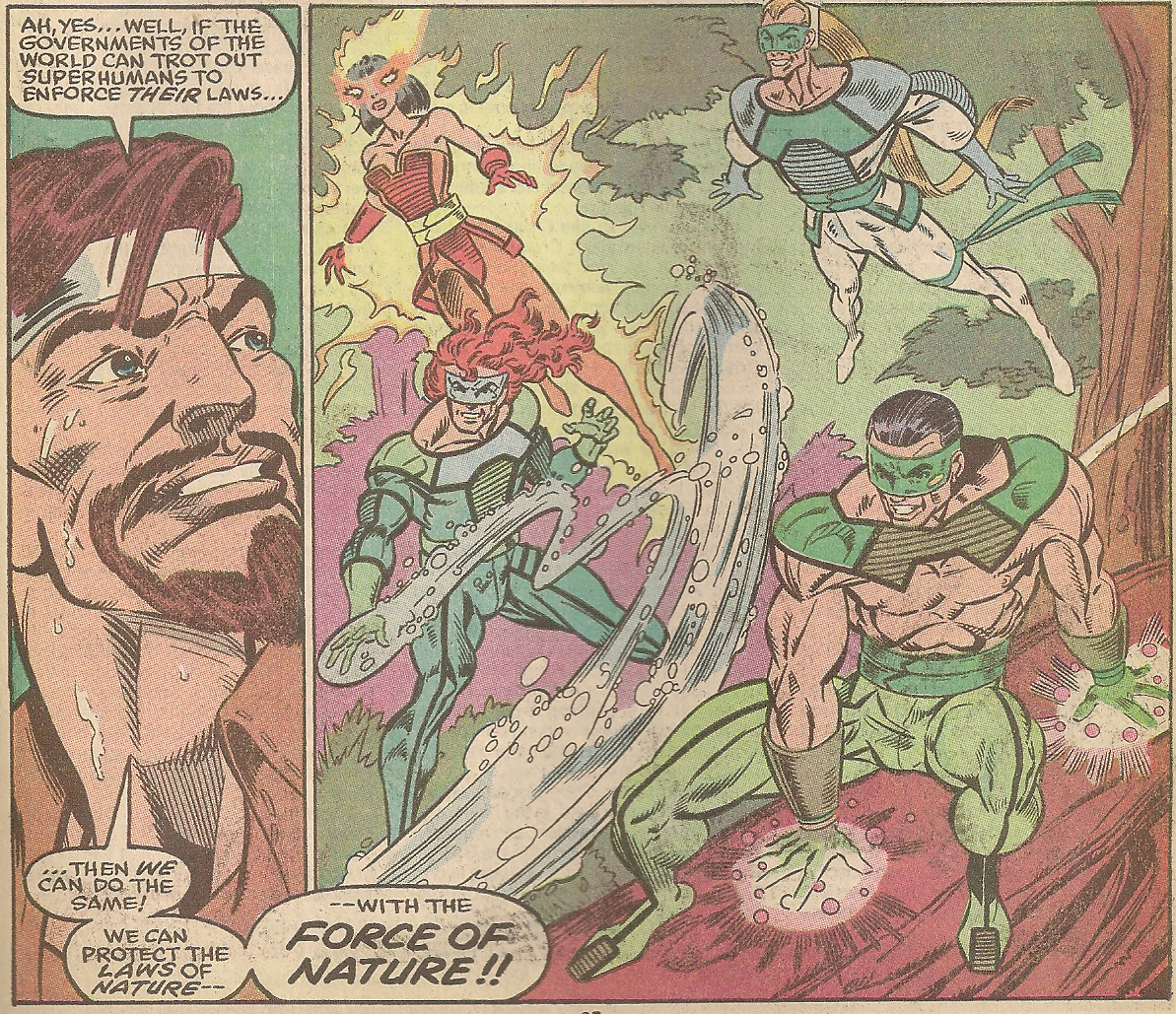 Behold! The Force Of Nature in all their lameness!
And you know what the sad part is? they had WAY better costumes before they became Force Of Nature.
Of coarse it ends with the Warriors stopping Project: Earth and Force Of Nature, and Speedball reveals his identity to his mother.
Issue seven to nine is... well, I have mixed feelings about them. The Force Of Nature is kind of a downer with their awful costumes, but it was great to see Night Thrasher in action without the Warriors, which is benefiting for him as a character, since he can be overshadowed by his super-powered teammates, and you start to wonder why he is even here. We also get a closer look at his armor, as the Punisher analyze it. He even compliment his bulletproof skateboard. He actually goes so far to consider getting one himself.
Punisher on a skateboard, while shooting up criminals, that would be kinda awesome! 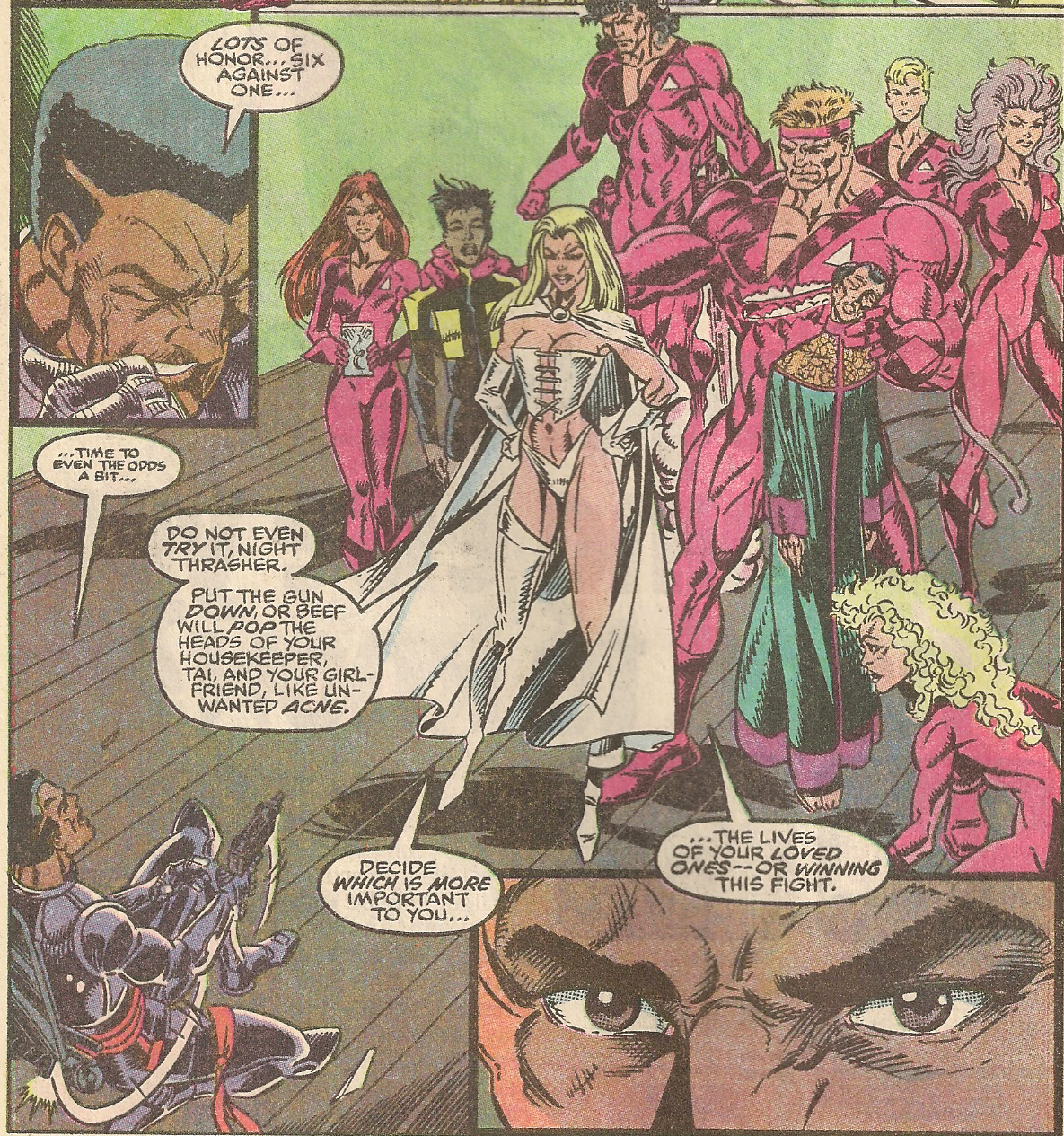 In issue ten we have... ANOTHER team with dumb-looking uniforms instead of costumes...
It's Emma Frost and her team; the Hellions. You see, to figure out Firestar's identity, Thrash hacked into the Hellfire Club's computer system to find it, Frost's personal files, to be specific. Frost is less than pleased about this, and have brought her Hellions, a team of young mutants who work for the Hellfire Club, to find out not only who did it, but also to make Firestar work for Frost again.
They fight for some time, after Frost and Tai agree to let the winning team keep Firestar, and when the Warriors stand victorious, Frost leaves as promised, but mock Firestar that she one day will come crawling back and BEG her to take her back.
Fat chance since the Hellions would be slaughtered few months later by one of Frosts allies. And yes, I'm a horrible person for enjoying her pain. And in the end of the issue, we see a woman in Egypt who now has gained power enough to rearrange history. This starts the epic three-part story-line: Forever Yesterday!
Which I can't review...
It's not that I don't want to, but I just don't have the issues. Well, that's not entirely true, I DO have the two first issues, but I have been unable to find issue 13, so I can't review it as a whole story.
Now, about issue 7 to 10; they were okay, not great, but okay. Barkly's art is good as always, but the storytelling is only decent here. I can't help it but being annoyed by the uniform teams. But it has plenty of action, some more character development, and it leads up to Silhouette becoming a member of the New Warriors. And it has been implied that there is something suspicious about Tai, who by the way could fight Frost telepathy. But next time, we put it up to eleven with the awesome return of Terrax!
I'm Waezi2, and thanks for wasting time with me.
Posted by Waezi2 at 1:41 PM