The quest for lost comics: Speedball; The Masked Marvel.

Well, before my retrospective of my favorite Marvel comic-book; the New Warriors, I guess it makes sense to look at some of the Warriors solo books. They are, after all, “lost comics” too. Let’s take a look at Speedball; The Masked Marvel.

Robbie Baldwin is the son of Justin Baldwin, District Attorney of Springdale, and Maddy Naylor-Baldwin, a popular actress.
After an accident at a lab where Robbie worked (Seriously Marvel Universe, STOP DOING ANYTHING SCIENTIFIC, YOU SUCK AT IT!!) he found himself surrounded by weird energy bubbles, dressed in an odd costume, and having a strange voice. He later learned that his body now generated a kinetic energy field that protected him from any impact and made him bouncing around with little to no control. He took the name Speedball; The Masked Marvel, and started to, poorly, fight crime in his hometown.
Considered that Speedball is kind of the Warriors’ “Beast Boy” who fire of bad pounds all the time, it is weird that he in his own solo series is... pretty dry. Robbie is a pretty normal guy. His only motivation is that he wants to evade any impact, since that would activate his powers and he would therefore be exposed. There is a long running subplot about his parents being under suspect for the murder of an old boyfriend of Robbie’s mother, but that’s as trilling as it gets. The most of the crime Speedy fight isn't much of a challenge. But it’s weird, and mostly involves giant chickens, hit men who throw balls after police officers, and men with big round heads.


But I will give the series credit for being possibly unintended funny. Mostly because of Steve Ditko, the artist of the series. Take a look at this weird faces: 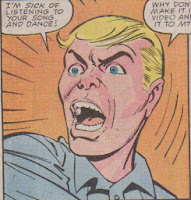 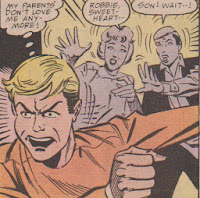 But that's not the same as saying that the series doesn't have it moment. There is some actual humor that may not make you drop dead of laughter but still makes you giggle. Like when Robbie ran away from home, declaring that he will stay in his cave for he rest of his life, but after calming down realize that he is hungry.
And that is how the series work: its quiet. Its like one of those corny comics from the 60's, witch is probably why it only ran for 10 issues as a series in the late 80's. Who knows, Speedball could have been a more successful hero if he were made in the Silver Age. And that is why it takes you of guard when Robbie's father says THIS: 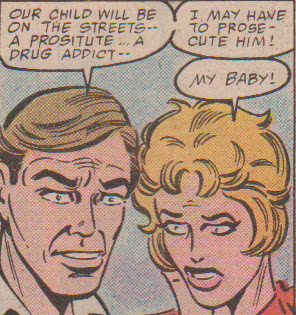 ... Holy crab, he just said prostitute!!! Why would he say prostitute?!! This is the Speedball series, as innocent as possible in the 80's!!! Whats next, Barney The Dinosaur is going to tell us about suicide? Dear god, I fell so dirty!!
And in issue 10, the final, there is a rather dark story about animal experiments, where Speedball has no choice but to kill a giant mutated rat with a gun! It is still a pretty goofy story, but still, rather dark compared with the rest of the series.

But anyway, Speedball is nothing special, and it is nothing you have to read before you die. If anything, get it if you like to make fun of it, and ask yourself how the heck this poor kid ended up in a s&m outfit.

I'm Waezi2 and thanks for wasting time with me.
Posted by Waezi2 at 3:47 PM