Well, issue one was pretty awesome. The next three issues are, sadly, not as good as the first one. In fact, I actually dont like issue two at all. 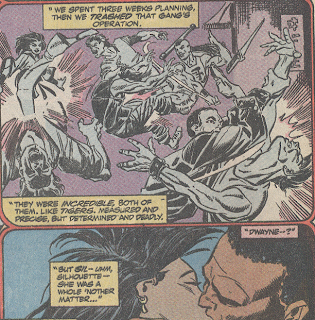 In issue two, we learn that Night Thrasher actually fought crime before he gathered the New Warriors, with two super-human siblings named Midnight's Fire and Silhouette... without disguises. It's not that I want them to wear capes and stuff, since this was before Thrasher became a "super-hero," but a ski-mask would probably be an idea, just saying.
They united their forces to fight drug-gangs in China Town, and Thrash even started a romantic relationship with Silhouette. Which makes it even more tragic when she got shot by a cop who thought she were a drug-dealer. Midnight's Fire swears revenge on Thrash AND the police.
And how does he get his revenge? He randomly kills cops, leaving a note, saying: "Thrashed by the night"
... You know, Thrash took him home to his apartment several times when they were working together, so why not just go there and get it over with? Just saying. 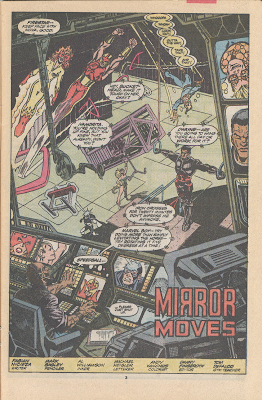 The issue is about Thrasher being scared of facing Midnight's Fire, the Warriors and his mentors telling him to grow a pair, and the final confrontation between Midnight's Fire and Night Thrasher. And THAT is the problem with the story; it's WAY to early to let him have a "grand, final confrontation." We just met the guy, give us some time to learn to know him, so we can feel for him.
Besides that, the issue is kinda messy. A lot of stuff haven't been explained, like how Midnight's Fire gained control over China Town(and why), that he didn't kill the cops for revenge, but because he had illegal weapons from A.I.M., and Silhouette is still alive but crippled. It feels like a two-part story made into a one issue story. But I DID like the training scene, where we see the Warriors exercise under the observant eye of Chord, who are by the way a former sergeant from the US army. 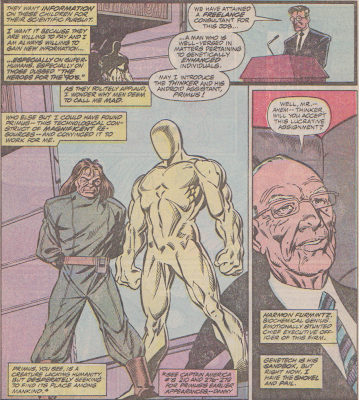 Issue three is luckily better. This time, its about the EEEEEVIL company Genetech, who wants to use the New Warriors for their sinister purposes. Because this was a comic from the 90's, so of coarse we needed an evil corporation who wanted to do nasty-wasty things to our heroes.
Genetech apparently works with genetic... stuff, and want to study the Warriors because of their powers, and since they are still very young and inexperienced, it should be easier than with veteran heroes, such as the Avengers. They have hired the Mad Thinker, a mad scientist super-villain, to take a look at the lads. But as he studies them, the Thinker realize that he actually likes this group of teenagers. Not so much for their heroic deeds (good thing, since this is only issue three) but because of the future yet to come which they represent. He was actually close to interfere wile spying on Marvel Boy, when his father were about to beat him. He even contacts the Warriors and warned them about Genetech. And then, Night Thrasher does this: 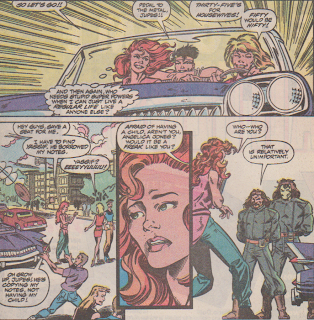 This issue is pretty fun. We have some more character development, such as Marvel Boy's father starting to hit him again, Thrash trying to rekindle his relationship with Sil, and Speedball having trouble at home with his parent arguing about a nature-organisation his mother has joined. Also, being a comic from the 90's, we have some unintended humor with Firestar and her "normal" friends saying stuff I'm ready to bet money on no teens from the 90's ever said. And we have a sort of the villains answer to a pair of buddy-cops with Thinker and his android Primus. I enjoyed it. 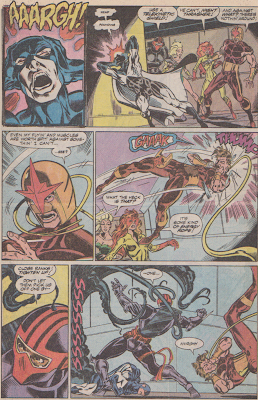 With information from the Thinker, the New Warriors breaks in to the Genetech facility, because "screw the law, we are superheroes!" But they get ambushed by Genetech's group of "lab-rats;" the Psionex. You know something I have noticed while reading comics? The Marvel U sucks at science! Pretty much anything scientifically ends in a disaster. The Psionex are a good example of that. One thing is that you give unstable teenager powers, but when you get that teenager from a mental facility, and gives her a costume and a name like Asylum, you might as well wear a t-shirt that says; "kill me, life is boring!"
... Maybe I should sell t-shirts like that!
We meet Harmon Furmintz, the owner of Genetech. He apparently missed the chance to become Captain America to Steve Rodgers, and has been fixated by creating superpowers ever since. And the Psionex are the result of his research. 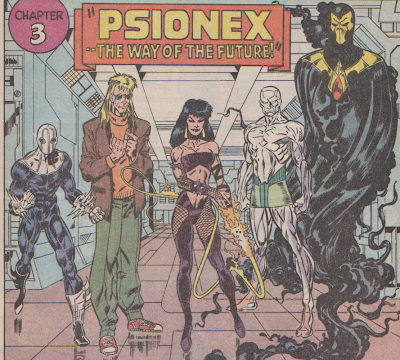 Here they are. We have Asylum, a nutcase who has the ability to make you see your worst nightmares (seriously, how can a genius be stupid enough to create THAT!), Coronary, a med-student who can control bodies, Mathemaniac, a math-wiz who now has... math-telekinesis? I dont really get it... Impulse, an aggressive street-thug who now can move with the speed of thought (again, WTF?) and Pretty Persuasions, a stripper (because what would a 90's team be without one of those, or a prostitute, that's even better) who has the ability to make men lust her, witch pretty much means that she is a super-stripper. And for some reason, she can use her stripper-power to create energy-weapons, with her signature weapon being a... No! Hell no! I'm not going to say it! YOU ALL KNOW  WHAT WEAPON IT IS! 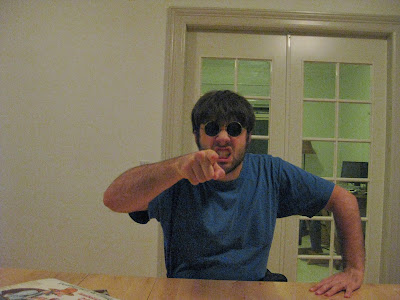 In fact, I want you to RIGHT NOW, before you go on with the review, take a piece of paper and write the most obvious weapon a super-stripper could use in he 90's! Do it!
....
You done? Good, and it is, of coarse: A whip! Seriously, one thing is stereotypes, but this is just TOO MUCH!
Of coarse the Warriors gets out of their imprisonment, being saved by Speedball, who comes in a nick of time and saves the team, so the Warriors can kick the Psionex ass... but they realize that they can't really do anything, since Psionex and Genetech haven't done anything illegal, just stupid. In fact, THEY broke into their property. Bummer. 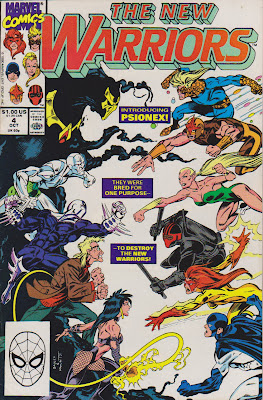 It's a shame that the Psionex are as forgettable as they are, because they were obviously meant as a counterpart to the New Warriors. They actually have SOME potential, and I kinda dig Mathemaniac, who by the way will be the main character in a pretty interesting story in issue 51. But they were only used in NW, and I understand why, since there are WAY better C-class villains in the Marvel U.