Hello and welcome to my blog number 100! 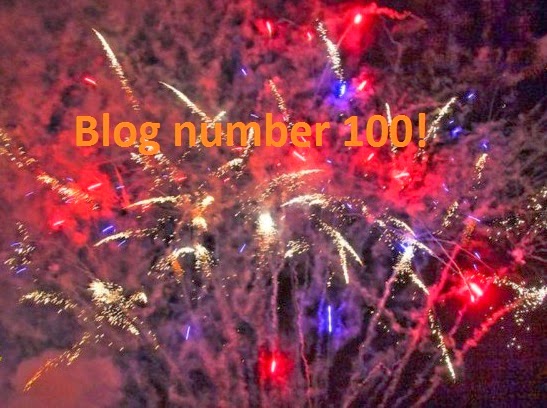 I want to make something special out of it, so I have decided to review a series that I have long wanted to read; New Warriors volume 4.
If you have followed my resent activity, you probably have figured out by now that I'm a New Warriors fan. And I was of course pissed when Mark Millar decided to blow them up for his craptastic event-comic Civil War. That would normally be the moment the team disappeared, as it is tradition in Marvel Comics. But no, a new NW series was published during the Initiative event after Civil War with an interesting premise: a bunch of former mutants who lost their powers on M-Day are gathered together by the apparently not so dead Night Thrasher to become the next generation of New Warriors. They fight crime, makes Initiative teams look bad, and they're not shy about what they think of Tony Stark and the Registration Act. Lot of potential here. I wanted to read it for a long time, but because of my economy, it had to wait. Now I have found a TPB "Secret Invasion: New Warriors" on sale witch collects the last 7 issues of the 20 issue long series.
And I am not impressed. 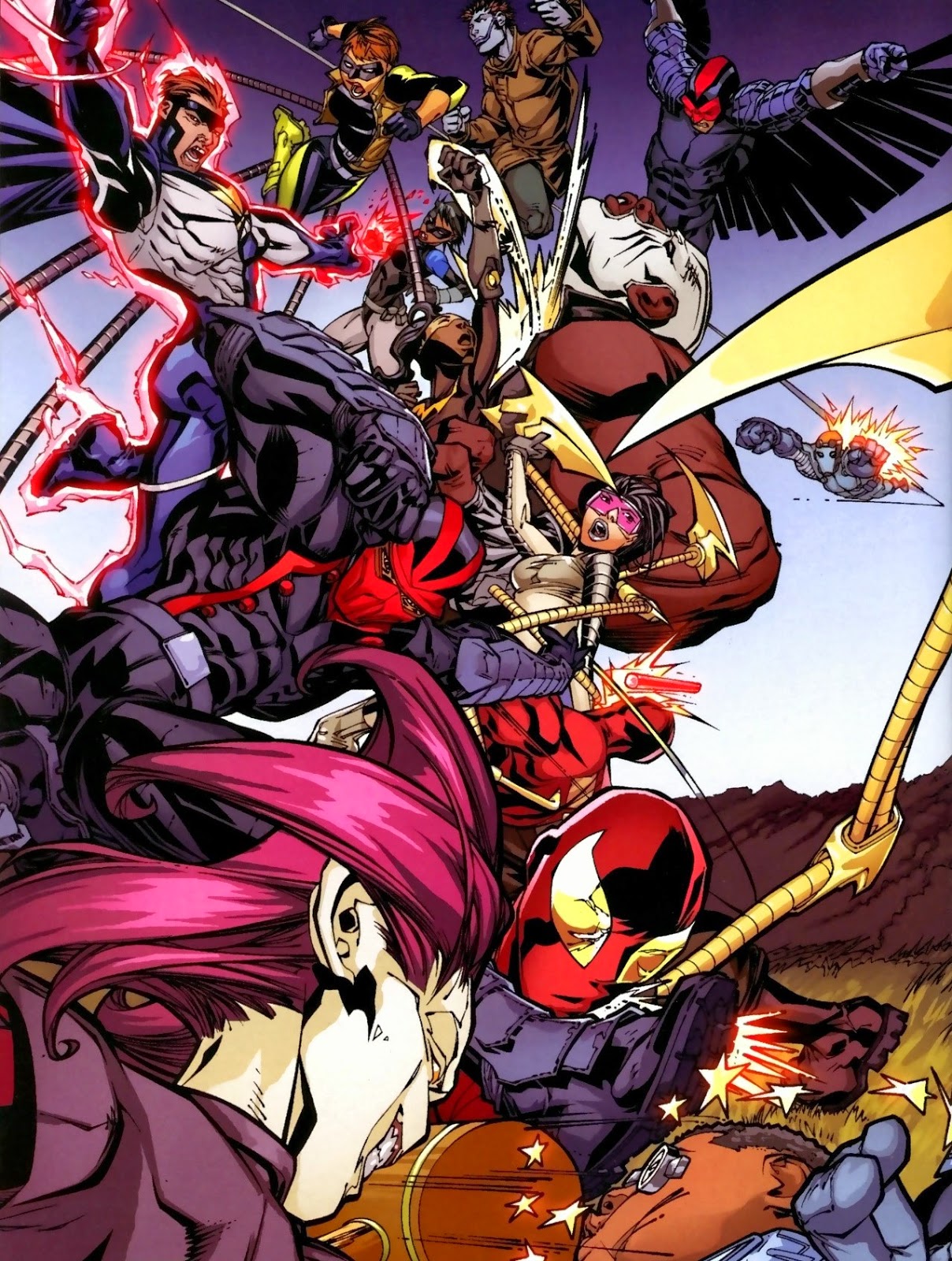 I know it hardly seems fair that I judge the series on the end of it, instead of it as a whole, but after reading this much of the series, I doubt that I would enjoy any of the other issues, and reviews of the other TPB doesn't convince me. Then again, it could be that "Secret Invasion" is to the NW what the "Black Adam And Isis" story-line is to the Justice Society of America, so I will buy it, IF I happen to find it. But only if its cheep.
Now, lets take a look at it, shall we?
The first two issues aren't really that bad, to be fair. I haven't read Secret Invasion yet, but I have read some of the tie-ins and understand the concept: Who do you trust?
Well, your old friend, who return from the dead and form a new incarnation of your team without contacting you at all wont be one of them.
Justice and Rage (old NW members) believes that Night Thrasher is a Skrull, witch results in a fight between the Warriors and Justice and Rage's new team; Counter Force. They later team up, once Thrash reveals that his true identity is: 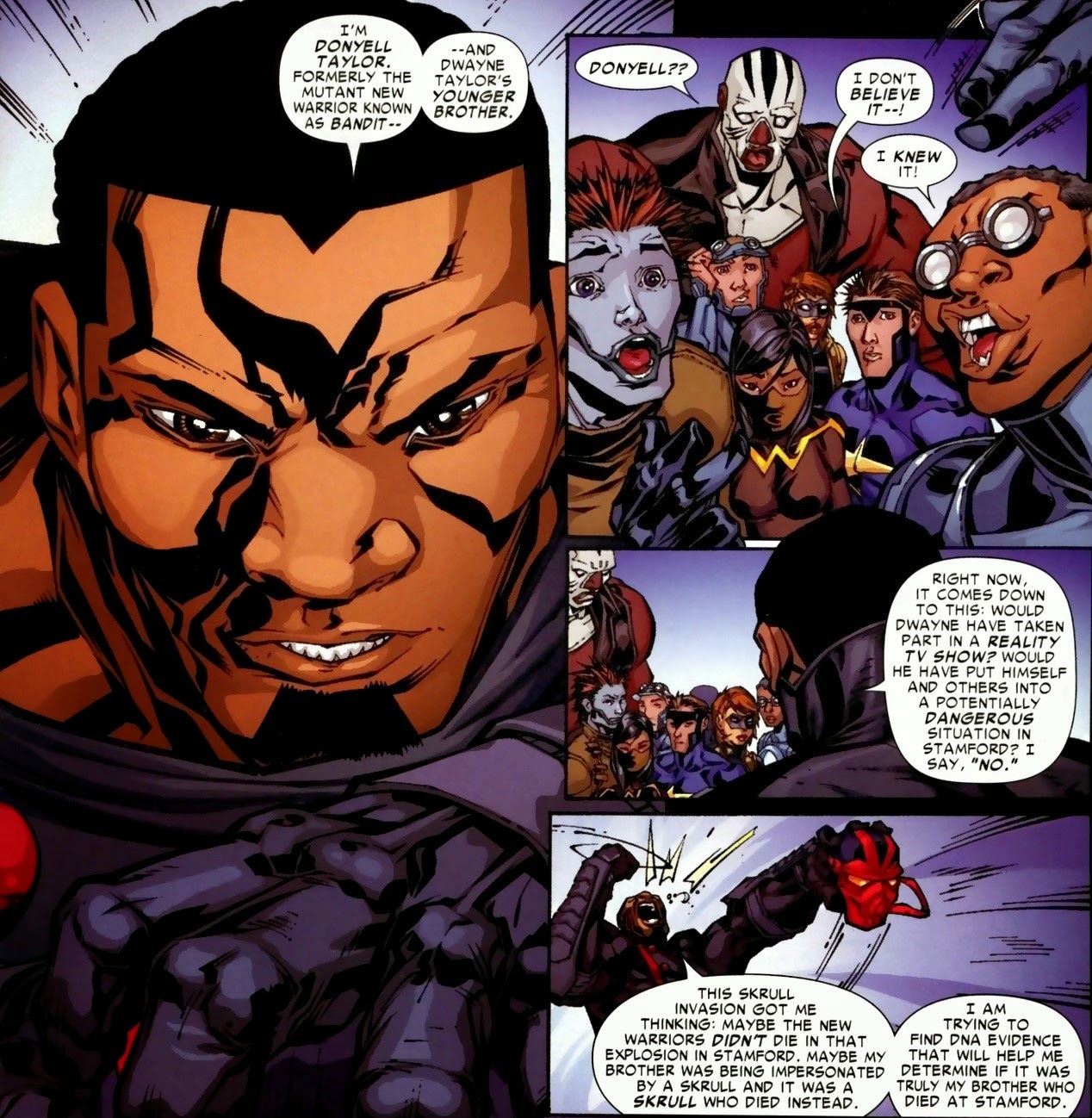 Donyell!!!
...
You don't know who that is, do you?
Donyell is the half brother of the original Night Thrasher. He was once known as Bandit, a enemy of his brother, due to jealousy of Dwayne having the family and money he didn't.
And now he's the new Thrasher, because they reconciled. Of-screen. Yes, seriously.
What is there to reconcile? They first met when they were both adults, its not like they were raised together. Beside the fact that they have fought each other, they are complete strangers. It would be like... I don't know, like, if Magneto had a father-like relationship to Quicksilver and Scarlet Witch.

... Wait, for realsies?
Beside that little bullcrap moment, its a decent story. Sure, the art could have been better, but all in all enjoyable.
And then comes the time travel...
One of the things I love about the Warriors is the fact that even though they a few times fight villains like the Sphinx and High Evolutionary, they are still pretty street-level. So its kind of a kick in the nuts when Thrash builds... a time machine. Out of scratch.
You know who has a time machine? Doctor Doom! Because HE is so insanely smart that he can actually do that. How the hell did Thrash build a time machine? Its just ridicules!
Anyway, the Warriors travel through time, so they can stop the Stanford explosion, but they make a mistake and ends up in the future.
I hate when that happens to me.
The future has gone all 1984 with Iron Man in control of everything and no superheroes left, except for Night Thrasher fight back. But Night Thrasher is really: 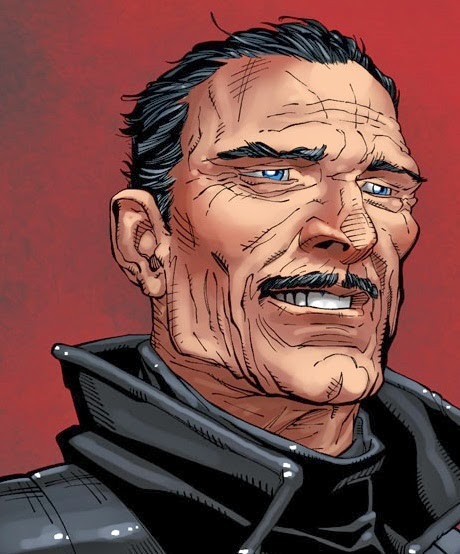 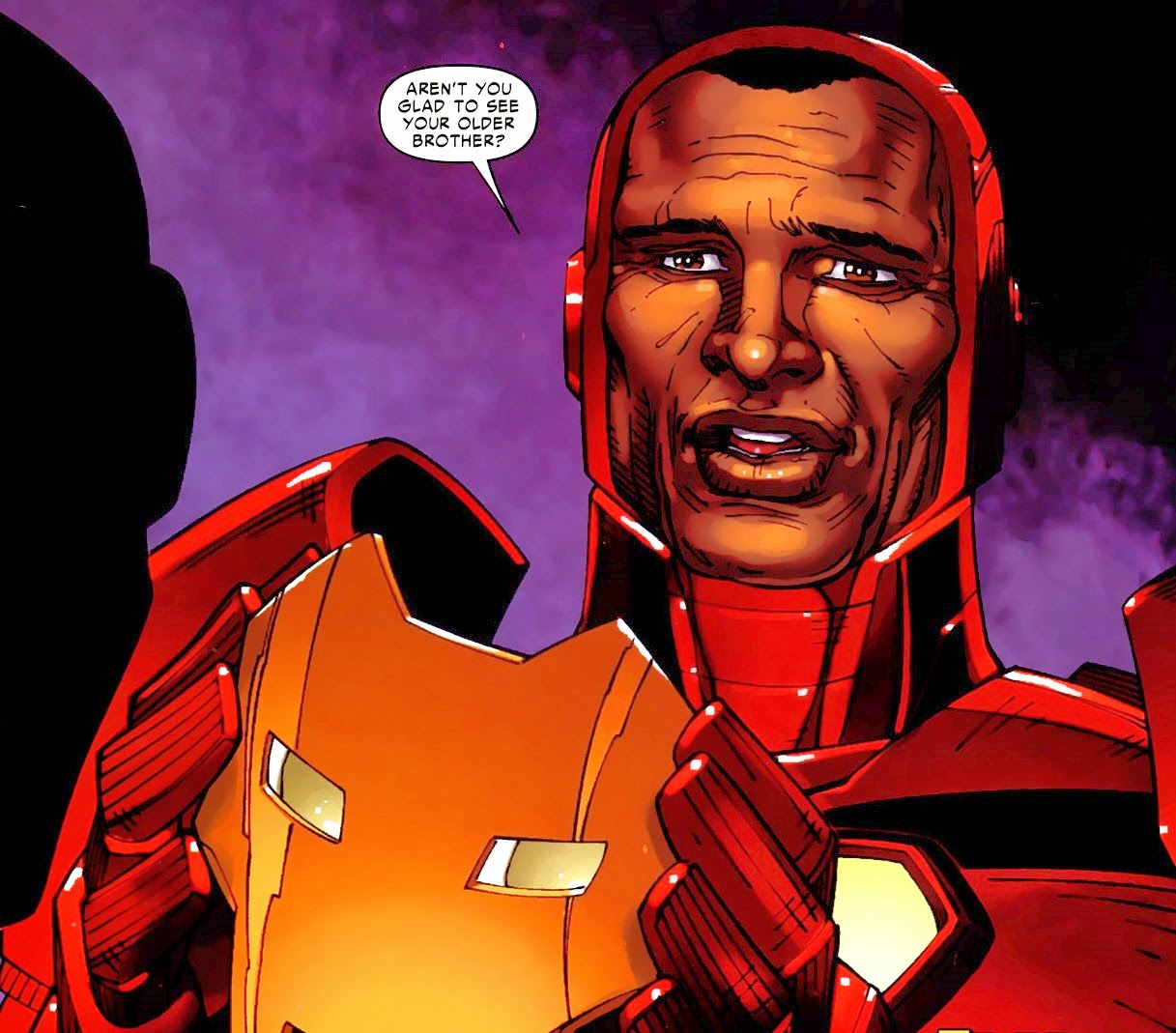 Dwayne Taylor, the first Night Thrasher? What the fuck?!?! What the actual fucking fuck!?!?
Like a) WHY is Dwayne Iron Man and Tony Night Thrasher? I get that Dwayne kicked Tony of the throne and took his power, but why change identity?
And b) HOW is Dwayne alive? Oh wait, that's right, they give us the answer: Science. Just science! No explanation except for that! No "he is a clone" or "a cure for death was found" or anything like that, just "science."
And c) ... you know what? FUCK C! FUCK D, E AND F TOO! FUCK THE ENTIRE ALPHABET!!!
I'm sorry, I normally don't swear this much, but this... THIS!!! THIS IS A PIECE OF CRAP FROM A DANISH POLITICIAN!!!
So as you may have guessed, the Warriors fight evil-Dwayne, release all the heroes so they can fight back, and return to their own time. And then they break up the team because... I don't know, and I honestly don't care anymore.
So that was "Secret Invasion: New Warriors." Thank god its over.
I'm confused as hell, since I have read another series written by Grevioux named "Adam: Legend Of The Blue Marvel" witch I truly enjoyed and recommend to anyone. But as a NW fan and a guy who loves comics, I do not approve of this... abomination.
That's all for now. I'm Waezi2, and thanks for wasting time with me.
It sure as hell was a waist of time for me.
Posted by Waezi2 at 6:32 AM