Not-White Month: Who Is The Black Panther?(the comic) 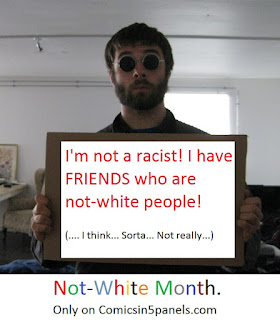 Hello, and welcome to Not-White Month 2015. The month where I take a look at comicbooks that, believe it or not, DOESN'T have a white guy as the main character, even though it's "normal" and "to be expected". As a half-Persian, I have always been irritated over the assumption that being white was considered normal, something that has bugged me ever since my teacher from second grad told me that I had made a mistake by painting the father in my color-book brown.

But enough of that, let's get this theme month started with probably the second-most successful black superhero known to man; the Black Panther.

"Who Is The Black Panther?" is a TPB that has the first six issues of the fourth Black Panther series. It has the retold origin of the mighty king of Wakanda as well as introducing us the his country and it's culture.
Even though I like the series, I'm not sure how to feel about the... retcons. YES, retcon is a regular thing in comics, and is close to impossible to evade when we talk Marvel, since they don't have events like DC to excuse shacking up the continuity. But... WHY is Klaw a stereotype assassin with a mechanical arm? How come the Radioactive Man is Russian? How come The Black Knight(one of the few great British superheroes) has been reduced to a religious nut? Sure, it's not the end of the world, but imagine if we retold Spider-man's origin and mad Shocker a criminal headbanger without powers, Doc Octopus a drug addict and Vulture a mean-spirited banker. Sure, you COULD do that, but... WHY?
Another thing is, well... do we really need Black Panther to stick it to the white man, showing that he doesn't need America and that they can go to hell for all he knows? Do we really need a black power story? Not that there is anything wrong with that, but it has been done before. Besides, Black Panther is awesome BECAUSE he is awesome, not because he is a black superhero. I mean, seriously; he is the sponsor of Mandela? MANDELA?! Do we REALLY need Mandela in this series? We get it, HE IS BLACK! Gee...
Besides that, it is a pretty cool start or the series, with a lot of action as well as some surprisingly good social satire. I will eventually get the second TPB in order to follow the adventures of the mighty ruler of Wakanda. The "Who Is the Black Panther?" TPB also has the silver age origin if you
That's all for now. Next time, we will take a look at an Asian superhero.
I'm Waezi2, and thanks for wasting time with me.
Posted by Waezi2 at 3:01 AM