I have two recommendations more. Starting with a Arkham-free Batman book for a change.

The most of the Batman comics I have owe are mostly those about Arkham, because, well, I'm not the biggest Batman fan.

Dude, I don't HATE Batman, I  just don't care about him the same way as the other heroes! Mostly because I just think I had my fair dose of Batman since I were a kid, with the animated show, the movies and the comics that were one of the few titles I could read translated to Danish. And I just think that Batman is a little bit overrated... Dear god, did I just write that? Look, lets focus on the actual review, shall we?

If you told me four years ago that I should read a book called Batman & Dracula; Red Rain, I would tell you that I were an adult, and didn't have time for such stupid ideas. Man, was I an annoying prat. The first rule about superhero-comics is, that there is no such thing as an bad idea for a story, unless its badly told.

Alright, FINE! There IS such a thing as downright bad ideas, but you get my point. Superhero comics are absurd by definition, and the art in it is to make the absurdity work. And this story does. It a dramatic tale of the fight against evil with great artwork and good dialog, where the Dark Knight has to become even darker than before in order to save Gotham City from Dracula and his army of bloodsuckers. A great book for Halloween. 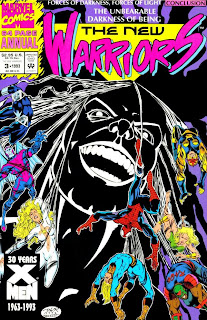 Darkforce is an energy-source from the Darkforce Dimension that has the ability to assume the properties of both matter and energy depending on the needs of the user. It has granted powers to charterers such as Cloak, who use it to teleportation, or Spot, who use it to create dimensional holes. Henrique Gallante, a young damaged man, unfortunately has the ability to control and manipulate the Darkforce as he is pleased, and use it to spread terror in New York, and only a handful of heroes, including the New Warriors, are there to fight the poor civilians, who are now under his control... Seriously, WHY would anyone live in NYC anymore? Its pretty much a war-zone for supers!
Forces Of Darkness, Forces Of Light is my favorite New Warriors story-line, and besides the Warriors and their bad-ass reserve-member Darkhawk, also has Thing, Spider-Man, Cloak and Dagger and more.

That's the recommendations for this year. Happy Halloween folks.
Posted by Waezi2 at 3:42 AM