Still going (for better or worse).

Vampires are awesome! Well, except for the sparkly pricks from Twilight. And it's not really Halloween without vampires. So read "Captain Britain And MI13: Vampire State". Its about vampires conquering England. WHAT MORE DO I NEED TO SAY?! And it's not very often we read about something as odd and awesome as a Muslim superhero with the sword Excalibur.
Not enough? Blade is part of the story too.
Speaking of Marvel... 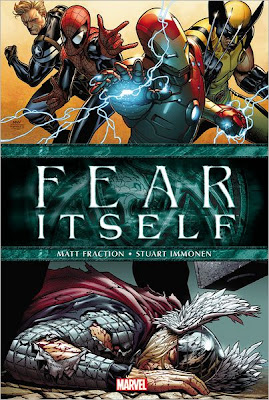 Sin, the new Red Skull and daughter to the first one, has unleash an old Asgardian god named Serpent, who now want revenge on Odin who imprisoned him thousand of years ago. But he needs to restore his powers first, and for that, he needs fear. By summoning eight hammers, he makes eight of the most powerful beings on the planet(including the Jugganaught, Hulk and Thing) into mad gods, who spreads chaos and destruction everywere they go.
Fear Itself is an epic tale about the heroes of Marvel facing a more traditional tread, instead of beating the snort out of each other. And it has some pretty badass moments from the Marvel trinity(Cap, Iron Man and Thor). Do yourself a favor: READ IT!
Posted by Waezi2 at 2:46 PM