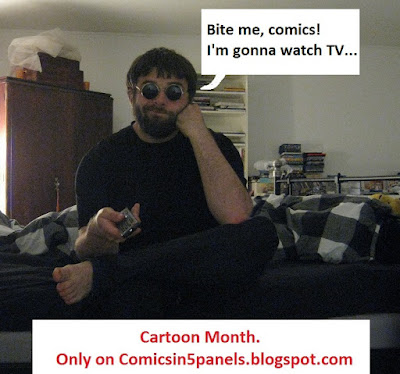 I'm more than just a comic-book nerd, you know.

I'm also a cartoon-show geek.
Even though I love the comic-book media, a break now and then can be a good thing. And in order to make sure that there will still be some activity in Comicsin5panels.com(and seriously, I needed some weeks ago), I will let July be the month where I tel you about animated shows that I love as much as comics.

Starting with what was my favorite show when I was a teenager; Oban Star Racers.
OSR is the story about the 15 year old Eva, who has been living in a boarding school for ten years after the death of her mother. But her father, the famous racing manager Don Wei, is still alive, and Eva decides to find him after she finally manege to run away from the school.
And she does find him... But he does not recognize her. Confused and intimidated of her father who has become a harsh man, she loses her nerves, lies that her name is Molly, and instead get's a job as a mechanic on his racing crew.
But fate has it that Molly shall be the pilot representing Earth in the greatest race of all time; The Great Race Of Oban, an event held each 10,000 years where racers from all over the universe compete for the Ultimate Prize. 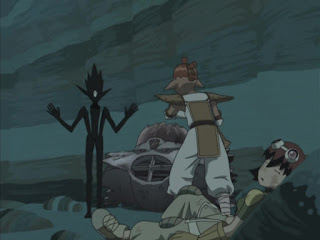 Oban Star Racers is a great colorful adventure, if anything a bit short(only 26 episodes). The animation may be a bit odd(humans without noses), but still excellent. The races are action-packed, the landscapes wonderful and the aliens and their racing-verticals are very creatively designed.
As second season starts, we realize that if this competition was more than just a race, it is most defiantly more now. As the competition goes on, the races becomes harsher and the pilots more brutal, all of them ready to do anything to win. Each of them has a dream that they are ready to throw away their self-respect and decency for. Friendship and mutual respect becomes a luxury that you can't afford. Honor and fair play becomes irrelevant.
I highly recommend this overlooked gem of an animated TV-show. My favorite episode is episode 11, furthering my favorite character through the entire series; Spirit, a mute, shape-changing alien who can transform into his own ship. And he also plays an important role in Molly's past.
Unfortunately, the DVD is a little difficult to find due to it being A; a bit old, and B; a Jetix series. But it should be possible to find it on Amazon, and all the episodes can be found on YouTube.
That's all for now. Next time, I will take a look on a series about a boy with spiky hair who saves the day by playing cardgames.
I'm Waezi2, and thanks for wasting time with me.
Posted by Waezi2 at 3:49 PM