Question; What does a giant green monster, a sorcerer supreme, the prince of Atlantis, and the herald of a cosmic entity have in common? Answer: ABSOLUTELY NOTHING! And THAT, my friends, is why Defenders Vol. 2 is flipping awesome! 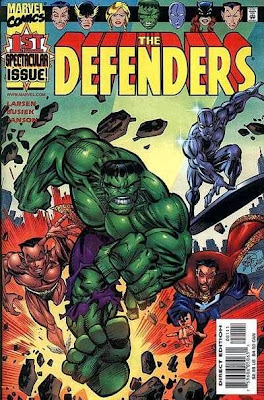 A lot of comics today take themselves very serous. And there is nothing wrong with that. But sometimes you just want to read weird-ass stories with plenty of humor BESIDES Deadpool. But you also need a good writer, or it would just be a meaningless mess. And Busiek is a GREAT writer. Together with co-writer and artist Erik Larsen, they have created a masterpiece, and I simply do not understand why this series haven't been collected in TPB.
After saving the planet together (and strongly against their will) Hulk, Doctor Strange, Namor and Silver Surfer have been cursed to become a team once again. So every time the planet is somehow in danger, they will be teleported without warning. This alone is irritating, but it's worse when your teammates are people you cant stand being with for 5 minutes.
The series lasted 12 issues, 18 if you count the 6 issue series The Order witch were the continuation of Defenders. The later I haven't read yet, but I sure as hell enjoyed Defenders. It has a ocean of weird monsters, strange villains (such as the Headmen), plenty of action, and it's a ton of fun! If anything, get it so you can read about Hulk duking it out with Orga:

Trust me, it's one of the most awesome (and funniest) Hulk fights I have seen.
If you want to read a book about a team who fight weird-ass monster, when they are not getting on each others nerves, I highly recommend Defenders Vol. 2.