I know I said that this time, it would be about the return of Terax, but we shall first take a look at issue 14, that has Namorita in focus. 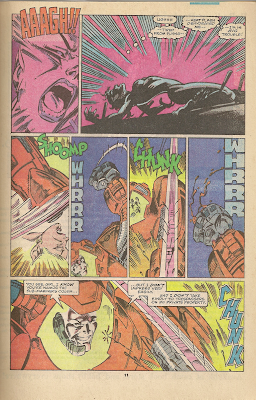 Namorita is quite possibly the most stable member of the New Warriors (that going to change, after she becomes the leader of the team), but as her cousin Namor, she has a fiercely temperament, so no matter what you do, DO NOT piss off Namorita Prentis. Sea Urchin did.
In issue 14, Nita ends u in a confrontation with Sea Urchin, an under-sea treasure hunter with heavy armor, as he was smuggling Atlantean treasures into America. After Nita tries to stop him, she get beaten into a pulp. After she gets conscious again, she of coarse try to get her cousin Namor to help her stop Sea Urchin, but Namor says that there in theory i nothing they can do, since Sea Urchin haven't gained the Atlanten treasures illegally and in theory Nita was the one who attacked him, so it could be argued that he acted in self-defense(before you ask, this was back when Namor had become a businessman and stopped hitting his problems as a first solution). Nita is angry over this and puts on a special battle-armor, only worn when you are going to fight to the death!!! And its very pink... Apparently, pink is a badass color in Atlantis... 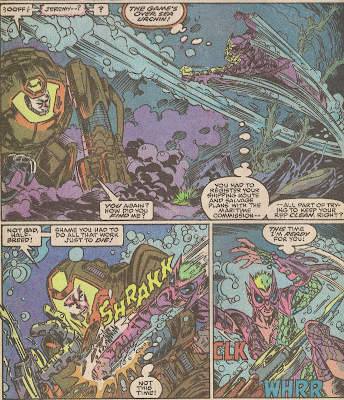 This time she is ready, boosted by her rage, and soon has Sea Urchin life in her hands. But before she breaks his armor, and let him drown, she realize hat it just doesn't feels right, and let him live, feeling ashamed for not living up to her peoples traditions.
The issue has its focus on Nita and her insecurity comming from realizing that she is a clone(sort of) and if she has any right to her Atlantean heritage. Besides that, we have a well executed underwater battle, and awesome guest-stars; Namor(who looks pretty cool in a business-suit) and Darkhawk, who are going to become a reserve-member of the New Warriors. BTW, have anyone read the Darkhawk series? Is it good?
In the issue, we also see Thrash and Nova make peace and Firestar and Marvel Boy start dating.
Oh, and Nova finally gets his classic costume back! 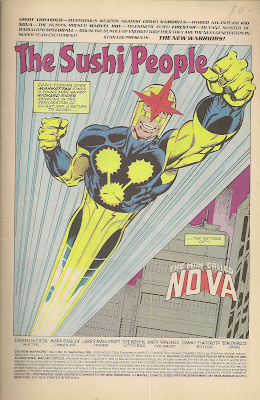 Yeah, some of you may have noticed from the scans that Nova has been wearing a red costume. His first was taken away from him after he resigned the Nova Corps, so he had to make a new one after getting his powers back. But Thrash has made a replica of his old one as a "sorry for trowing you down from the roof" gift. He even made him a high-tech helmet, that may not be as advanced as alien technology, but is still pretty useful. It has stuff like night-vision, telescopic lenses and police-radio, to name a few. I am more than happy to see him back in what is my favorite Nova costume.
But let's get back to the actual story. In Issue 15, we see that Genetech is apparently even bigger morons than I thought, since they are not only STILL experimenting on the Psionex(they have become even more powerful and crazy by the way), but they are also trying to recreate Terrax! Hey, I just thought of an interesting experiment Genetech could work with; see how big the chances are for dying, when you shoot yourself in the face with gun! I'm sure the result would surprise us all! 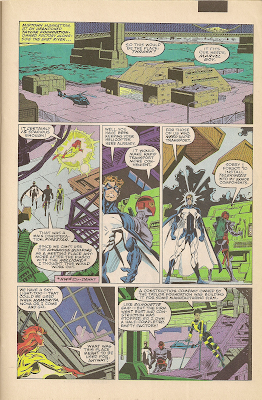 Meanwhile, the New Warriors has gained a new headquarter; an abandoned factory! The Warriors sure are clamorous team.
It may not sound that impressive, but its actually a good idea in more than one way. First of all, the factory is where Thrash keeps the Warriors helicopter, so they can get access to their transportation faster. Secondly, it has a lot more of space for when the Warriors train. And it's also unlikely that anyone would come to the factory, since it has been closed down for a long time. I like it. It is safer than something like a big T-shaped tower or something.
As they are packing out, they get a priority signal from Genetech(how does that even work?). The Psionex has run amok(surprise, surprise) and the Warriors must fight them again. As they fight, Furmintz comes to the stunning realization that giving psychopaths powers was the worst decision in his life, and that it has to stop. And how is he going to solve the problem? MORE Science!
Dude, fight fire with fire doesn't mean that firemen use flamethrowers to extinguish flames! 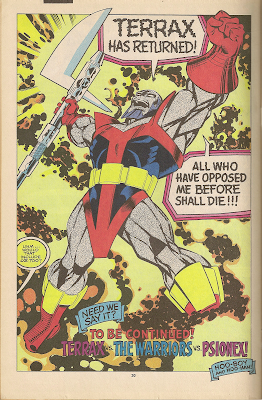 And what is the dear doctors brilliant plan? To let Terrax posses him! Furmintz thought that if he let Terrax use him as his host body, that he would have the will to suppress Terrax influence and that way have his powers, but sill control the body. BOY, WAS HE WRONG! Terrax is back,and he declares that all who has opposed him shall die, starting with the New Warriors.
You know those comics were superheroes somehow defeat opponents who are WAY above their league, even though its really unlikely, like when the Teen Titans beat Superboy Prime? That doesn't happen here.
And yes, I know that the Warriors fought and defeated Terrax before, but that was when he was in a weakened state, and they only won because he needed to be in contact to the ground. But with a actual host body, it's not a problem anymore. The Warriors are now nothing but annoying obstacles for Terrax, who now mobs the floor with them, as he spreads destruction. Nova realize that they are outgunned, and fly of to get reinforcement. And who does he get to the Warriors aid? No one else but the flipping Fantastic Four!!! 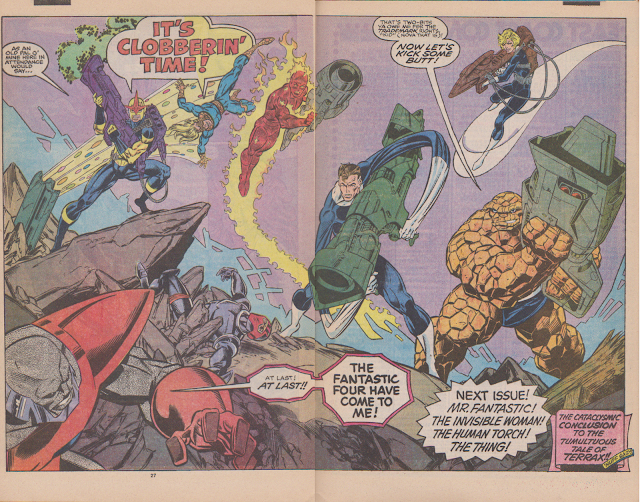 Holy crab, this two-page splash-page is awesome! We have the Fantastic Four (and Nova) with big-ass guns, ready to fight Terrax. Forget the air guitar! My inner 90's kid is playing a real BURNING guitar! If I could, I would make this into a poster! 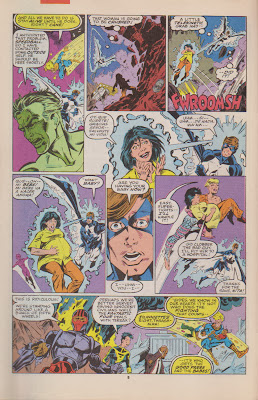 I remember that I actually disliked this issue for the same reason I love it now: The Fantastic Four (and Silver Surfer, who shows up later) saves the day, and not the Warriors. The reason to I disliked it to begin with was because I wanted to read about the Warriors, not the FF, and I felt that it made them look useless. The reason to I like it now is that, well, the Warriors realize that Terrax is out of their league, and that the FF has more experience when it comes to fight him. And they DO help too. Not with the battle, but with saving the civilians, like when Marvel Boy saves a pregnant woman. There is a sweet moment in the end of the issue, where we see the woman, now with her newborn baby, who ask Marvel Boys permission to name her boy after him... Good thing he told her his real name was Vance, because Marvel Boy Arranaga would be a stupid name, if you ask me.
I hate stories like World War III for having all of the heroes charging against a overpowered being, where all the low-powered and powerless would be in the way, when they could do something else that could be just as important,. Sure, Thrasher is peeved over his team looking like a bunch of fifth wheels, but hey, that's life. So if you ask me, its a surprisingly mature story, and I am very satisfied.