Black Panther is quite possibly one of he most successful not-white superheroes ever made.
... And I know practically nothing about him...
It's not that he doesn't interest me. He just, well, ended up in the bottom of my to-read list, since there was a bunch of other comics I rather wanted to read. That, and that he and his nation Wakanda seemed to me like a bunch of alpha-pricks in the Black Panther cartoon.
But we are not going to talk about T'Challa, but his sister; Shuri.
After T'Challa is killed by Doctor Doom, Wakanda is without a king. A new Panther mus be found to protect the proud nation, and princess Shuri is the best candidate. This is the moment Shuri has waited and trained for her entire life, but is she truly ready to take the mantle as regent?
The series has allot of action. Wakanda is an African nation unspoiled by imperialism, and yet it's successful, highly educated, and rich, but it still has respect for it's myths and religions. It kinda reminds me of the series; The Phantom, which I was raised with. And I love me some Africa-jungle action. So I was a little irritated when Shuri left Wakanda, which meant that allot of the fighting took place outside he jungles. Bummer...
Shuri is stubborn, and prefer to handle her problems by charging at it. In the series, she learns how to be a proper Black Panther, including that no all conflicts can be solved by the use of a spear, as well as a lesson in humility. I had hoped he series would have been longer, so that her character could have slowly fitted into the role as the Panther(like the way Bucky did in Brubaker's awesome Captain America series), but for a only 12 issue long series, it could have been worse. It's actually not bad at all.
AND the series has MANDROIDS!!! 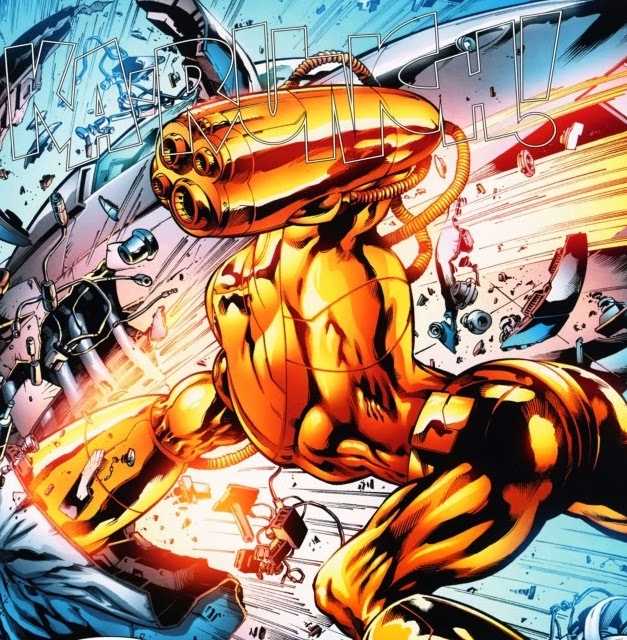 HELL, MOTHER-FRICKING YEAH!!!! I haven't seen one of these babies since New Warriors issue 5!
But besides the awesomeness that is mandroids, this series is definitely worth reading. It's not amazing, but it's pretty good.
I'm Waezi2, and thanks for wasting time with me.
Posted by Waezi2 at 3:24 PM