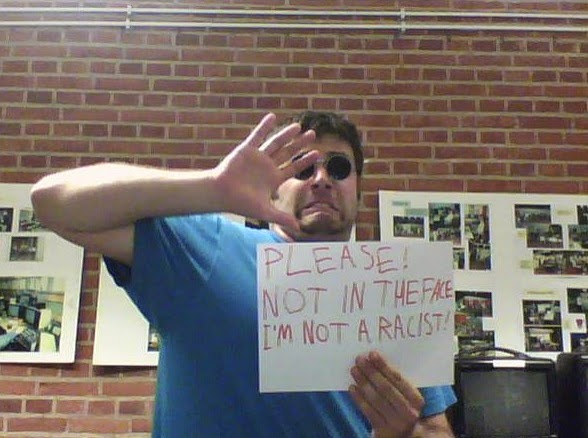 Welcome to the first review of "Not-White Month," where we shall take a look at a couple of series about superheroes, who aren't Caucasian. Because, even though there are a couple of not-white heroes with a solo-title(like the new Ghost Rider and Ms Marvel) it's the white guys who has dominated the marked  for YEARS, and colored superheroes is mostly part of team-books. We shall start the month with my third favorite comic-series of all time; Chuck Dixon's Green Arrow.
Before we talk about Dixon's awesome run, let's talk a little about Oliver Queen.

In the late 80's and early 90's, Ollie had become a rather dark character. Ollie stopped using trick-arrows, and started to KILL criminals in cold blood. He also grew distant from Black Cannery, and their relationship ended when he kissed his secretary(which both comic readers and writers STILL make such a big deal out of. IT WAS ONE KISS, FOR CRYING OUT LOUD!). Ollie grew more and more self-destructive, and after killing Hal Jordan(long story) he decided to stop the violence, and join a Buddhist monastery, hoping to find inner peace.
And that's where Connor Hawke steps into the picture.

In the ashram, Ollie meets a young monk called Connor, who apparently is his biggest fan. He has a scrapbook full with newspaper pages about his many adventures, and he absolutely idolize the Emerald Archer.They became good friends, and Ollie taught the boy everything he knew about archery, and told him stories from his golden days as hero. Unfortunately, Ollie couldn't stay in his little paradise of none-violence, since the government was after him. Because, HEY, it was the 90's, where the government was big, bad and evil. Ollie left, but this time with a new traveling companion, the young Connor. They both took the name Green Arrow, and fought together to find out who wanted Ollie dead, and why.
... AAAAAND then Hal, who BTW weren't dead, screwed it up by revealing to Ollie, that Connor was actually his son. Ollie was pissed over being lied to, and felt betrayed(and I know that it was retconned into that he always knew he had a son, and I dont care), and told Connor to stay the #@%& out of his life.
And then he blew up, before they could make peace... Ouch...
Connor decided to live where his dad died, both as a way to honor his memory, but also as a sort of spiritual journey. If he couldn't meet the man, he could learn who he was by doing his craft. And that was the start of the second Green Arrow's era.

After Ollies death, Chuck Dixon(writer of such great series as Robin, Nightwing, The Bitch Patrol Birds Of Prey, Batgirl: Year One, and a couple of Simpsons Comics) took over the title and filled the before so dark and gritty series with allot of fun, adventures, and all the good stuff comics should have. And he made Connor into a very interesting character to read about. You see, Connor has ABSOLUTELY NOTHING in common with his dad! Ollie was a loudmouthed, rude hot-head, but Connor was polite, calm, and an all-around nice guy. He could kick your ass without breaking a sweet, and be polite about it at the same time. And that's another thing: Connor was a master in hand-to-hand combat. Sure, he was a good marksman too, but he didn't use as many arrows as his father, and just regular ones. Connor was more of a simple-solution kind of guy, and did just fine with an arrow and good aim.
And what goes for the ladies, well... Just take a look at this classic page from issue 106: 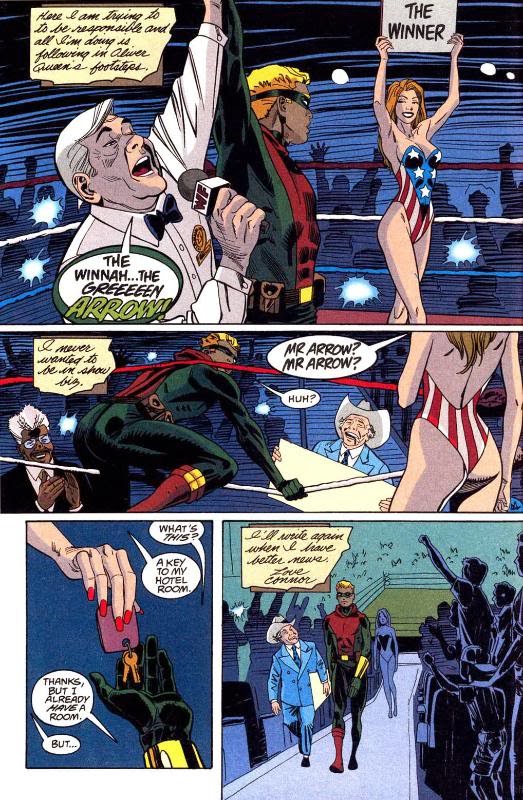 DUDE!!!
Event though Connor has inherited his father's charm on the ladies, he is unable to notice if he is attracted to them or not. He wasnt even gay, itt was just that being raised in a monastery for the most of his life, he has never thought much about the opposite gender, and to him, attractive women are just... well, people. But that didn't stop the ladies from finding him attractive... Lucky bastard... Literately...

Unlike many superheroes, Connor didn't have a specific town in which he operated, but instead traveled around the globe, looking for adventures and injustice to fight. With him, he had Ollie's old friend, Eddie Fyers as traveling companion. Eddie was a gun-wielding, chain-smoking ex-CIA agent, and unlike Connor, he had no problem with lethal force at all. They were an odd couple, but he ended up being Connor's mentor, since Ollie had made him promise to look after Connor if anything should happen to him.
Connor's solo career starts in issue 102 of the VOL 2 series, and I highly recommend it. The series haven't been collected in TPB, I'm sad to inform, but it shouldnt be to difficult to find the issues on sites like Ebay. There is a book collecting the mini-series called "Connor Hawke; Dragons Blood," also written by Dixon.
That's all for now. Next time, we shall take a look at Greg Pak's War Machine series.
I'm Waezi2, and thanks for wasting time with me.
Posted by Waezi2 at 4:22 PM