Here is some other Halloween recommendations. 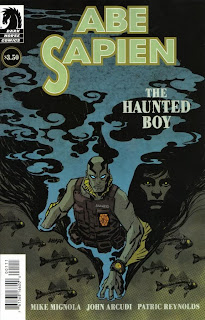 I’m not a huge fan of Hell Boy, but that is not the same as saying that I don’t see the awesomeness in the series. In fact, I would recommend that you read any Hell Boy comic you can find. But there is one of Hell Boy's fellow agents from the B. P. R. D. who interest me a great deal; the amphibious Abe Sapien. He is the star in this one-shot issue called The Haunted Boy. The story is more sad than disturbing (don’t worry, it IS pretty disturbing), but we can all use a little sadness in Halloween too, can’t we?

Last week, I recommended a comic about Arkham Asylum, and here is one more: Batman; Devils Asylum. It’s a tie-in to my favorite crossover comic of all time; Underworld Unleashed. The story is about an inmate, Kryppen, who are offered the deal of a lifetime … From the devil himself! Instead of focusing on the more famous lunatics like the Joker, who aren't even in the story, it focuses on Arkham Asylum that is filled up with madness and cruelty, with or without super-villains. And that's not all: I have a theory that Kryppen might not have made a deal with Neron at all. Think about it: Neron have been handing out deals left and right to villains and even a few heroes, but why Kryppen? His just a crazy nobody. And we never see Neron in the issue, which only support my theory that Kryppen is hallucinating, and that it's all in his head. Strange things happens so Kryppen can get what he need, but couldn't it be coincidences? My point being that this is either the story about the devil making Arkham worse than it already is(and that says something), or a tale of plain, ugly madness. Great one-shot issue.