First of all, YES, I realize that August is over, so I shouldn't really keep posting Not-White Month reviews. BUT, do to being the owner of three adorable kittens, I have been a tidy bit more busy than expected. But I still have three more comics I really want to review, so I say; SCREW IT! I'm Waezi2, BITCH!!! August is over, when I SAY it's over! So please add an August the 32st page to you calender, as we continue Not-White Month.
Today's subject is the comic-book series; "Daken; Dark Wolverine," and I have to ask...
... What the hell just happened?!

What just happened to ALL the awesomeness of "Dark Wolverine"? How could "Daken: Dark Wolverine" fail so much?
After issue 90 of Wolverine, Daken left as the main character and now stared in a series of his own; Daken: Dark Wolverine... Because it apparently was VERY important to use the word Wolverine to sell the book. But what do I know about marketing? Maybe we really need to make a series called "Winter Soldier; Young Captain America"?
Anyway, back to the failure that is "Daken: Dark Wolverine."
Remember what I said was so great about "Dark Wolverine" series? That Daken was this powerful, manipulative, attractive bastard that you couldn't help but like and root for? Imagine that this piece of awesomeness became a drug-addict. All the power, all the control, all the genius that guy had was gone in a second. THAT'S exactly what happens here, people! THEY MADE DAKEN A DRUGGY!!!
Instead of being about how awesome he is, it's about all the awesomeness he lost! All the awesomeness he doesn't have! And to top it all, he get's a dump-ass love interest who's around as useful as Sakura before Naruto Shippuden. And THAT says allot! I really wish I had more to say, but I dont! I just really despise this series! This series is for Daken, what "Emerald Twilight" is for Hal Jordan... Except for the detail that "Emerald Twilight" at least gave us Kyle Rayner. "Daken: Dark Wolverine" gave us NOTHING, except for disappointments.
... Well, to be fair, the first eight issues was actually pretty good, but they cannot compensate for the rest of the series. And I get that it has allot to do with change of writer, but really; who in their right mind could possibly think that making the main character in a comic a drug-addict a good idea. When has is EVER been a good idea to make a super-villain/hero an addict? 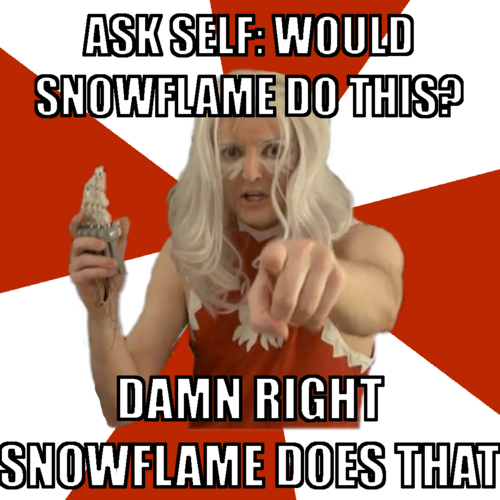