I cant even write the word without grinding my teeth a little. Of all my childhood hobbies, the Yu-Gi-Oh trading-card game is the one I feel betrayed by the most. Tournaments are no fun at all, unless you are a gigantic geek who has the right card, because it all ends up in whatever you have the right cards or not. Different strategies doesn't mater. Yu-Gi-Oh has killed itself. Even worse is the anime that literally LIES to the kids. It claims that everyone can be a master duelist, as long as you work hard and believe in yourself, but it's rally all about buying cards to an obsession. This game is nothing more than a glorified money-maker, that makes kids rude to each other. Sure, there are other games like Vanguard and Magic The Gathering, but they at least require a strategic mind and well-prepared decks. Yu-Gi-Oh is simply too easy to win if you have the money for it.
...
Wow, that WAS refreshing! I feel a tidy bit less cranky about Yu-Gi-Oh.
Well, now that I have that off my chest, let's talk about the manga, shall we?
You may not believe it, but there was a time where Yu-Gi-Oh were more than just trading cards. It was one heck of a messed up manga about a boy who got the mystic power to punish all of his tormentors VERY harshly! So it's needles to say that there were moments that almost gave a 13 year old me trauma when I first read it. So since Halloween is near, I will give you my personal top nine Yu-Gi-OH MY GOD(!) moments. Here is number 9: 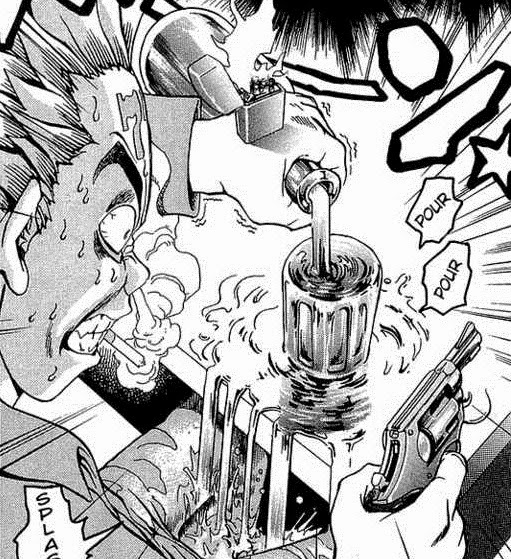 In chapter 4 of the series, a man escapes prison and made Anzu his hostage. Yugi then challenge him to a game, that involves only using one finger. First one to die, lose. Yugi wins by tricking the madman into letting him light up his cigarette, and then place the lighter on his hand as he is filling up a glass of vodka. The escapee is now unable to move, since the slightest movement would result in the lighter dropping in the vodka. He get's so scared that he drops his cigarette in the vodka, and he then BURNS to death!!! This was the first time(but not last) someone died as punishment in the manga, so this was a big deal. 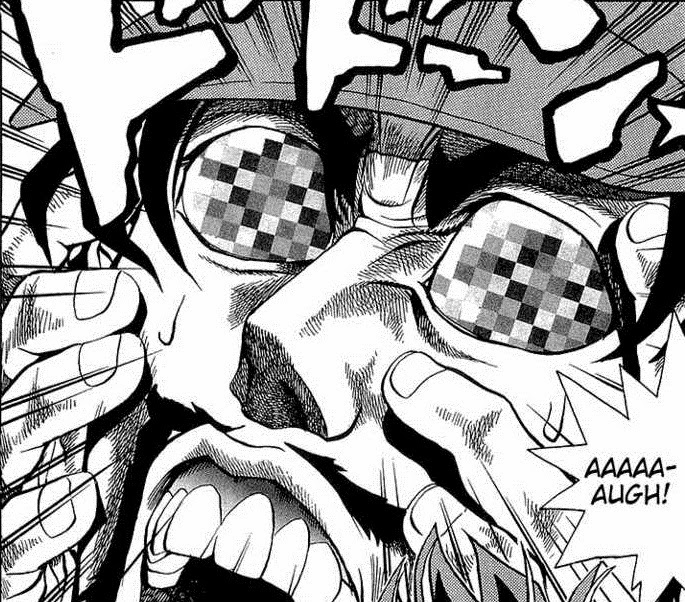 Number 8; Mosaic Illusion.
An messed up and evil film-director wants to make a documentary about bullying in Yugi's school, and hire a guy to dress up as a student and beat the ever loving shit out of Yugi. The director is later challenged by Yugi to a shadow-game. The film-director lose, and as punishment, he get's the curse "Mosaic Illusion," so that he for the rest of his life must now see the world pixelized like his so-called documentaries. Now THAT is a pretty grim and hardcore punishment! 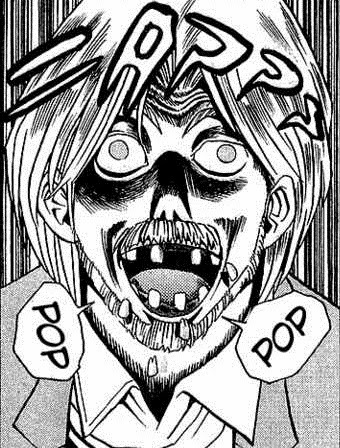 Number 7; Zombie Yoshimuri.
As a way to force Yugi into his pharaoh-persona, the tomb guardian Shadi casts a curse on a friend of Yugi's grandfather; Professor Yoshimuri. He becomes a mindless zombie, and starts to attack Jonouchi. Nothing stops him, no matter how many times Jonouchi punches him in the face! Heck, he lost most of his teeth! Seriously, just look at the scan to the left, TOTALLY CREEPY!!! 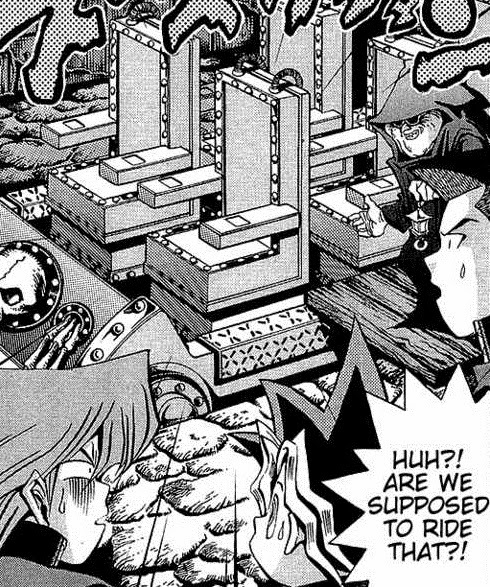 Number 6; The Electric Chair Ride.
This moment is not so terrifying because of the actual game, but because of the guy hosting the game. When Yugi and his friend are trapped in Death-T(an amusement park of death created by Kaiba), one of the rides they have to go through is called "The Electric Chair Ride." Make one sound, and you will be fried. But what's REALLY unconformable about it is Kaiba's butler who are in charge of it. Seriously, he is creepy as hell, and he enjoy this game with passion! EW!

Number 5; Monster Fighter.
Nagumo, a guy in Yugi's school, beats up the students and steels their Monster Fighter figures. Yugi challenge him to a shadow-game version of Monster Fighter in order to punish him. In this game, whenever their monsters are hurt, THEY receives the damage instead. So when Nagumo's monster is punched in the face, his own face starts to crack. Not bleed, CRACK. This makes the game even more surreal by making them break apart like toys, instead of bleeding like humans. 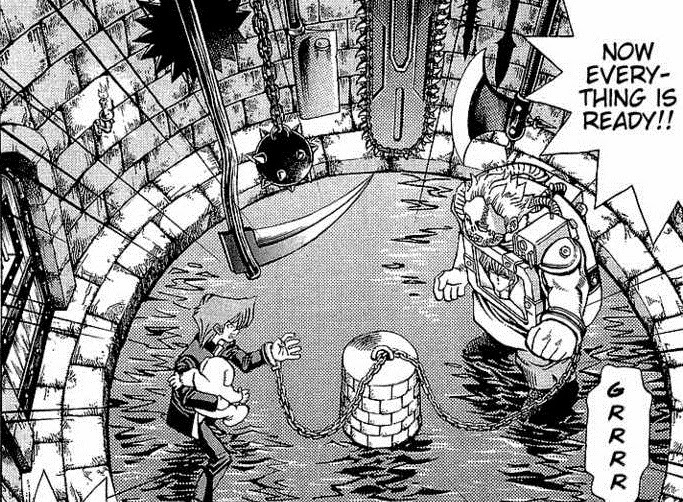 Number 4; Jonouchi VS Chopman.
This is the least game-like game in the whole series. In Death-T, one of the rides ugi has to go through is called "Murder Mansion." In it Jonouchi has to fight a man-monster called Chopman, a serial-killer hired by Kaiba to be part of Death-T. And holy crab, Chopman is scary as hell! He is pretty much all crazy murderers from horror-movies putted together! 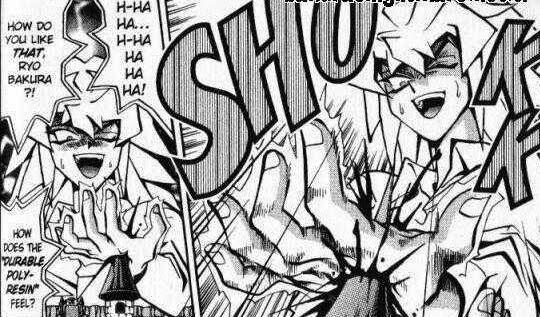 Number 3; Evil Bakura impales his own hand.
MOTHER OF GOD, HE IMPALED HIS OWN HAND! AND HE IS LAUGHING AT IT! THIS GUY IS SICK!!!

Number 2; execution execution.
In middle-school, Jonouchi used to be part of a gang of led by a mean SOB named Hirutani. They went their separate ways, when Jonouchi went to Domino High. But later, Jonouchi is visited by Hitutani, who wants him to be part of his gang again. Jonouchi at first has no interest in being part of it, since he has moved on from being a violent delinquent, but joins the gang ones Hitutani threatens to hurt his friends bad. After one of Hitutani's guys punch Yugi, Jonouchi starts to beat the shit out of all of Hitutani's gang-members, but ends up, and here comes the fucked-up part: He ends up being tied up in a abounded warehouse, where Hitutani and his guys ELECTROCUTE him with the intention to go on until he dies! DUDE!!!

Number 1; Yugi and his friends during Death-T.
This one might need a little explanation.
Remember what I said about Death-T? That it was an entertainment-park of death, which was created to get back at Yugi for defeating him? That it was full of sadistic butlers and crazy mass murderers? Have that in mind, and then look at this panel...

... What is WRONG with you people?!?!
Be horrified, for Christ sake! You almost died! Several times!!! And you act like you are Ash and his friend on their Pokemon journey! And this specific panel is RIGHT after the Chopman fight! They look like Jonouchi won another gym-badge, not like he just KILLED a guy! Sure, he was a mass-murderer, but he was still a human being. A human being who were BURNED to death! WHAT IS WRONG WITH YUGI AND HIS FRIENDS?!
And that was my top 9 Yu-Gi-OH MY GOD(!) moments. Next time, I will have some recommendations for Halloween reading, including one about the Spirit Of Vengeance.
I'm Waezi2, and thanks for wasting time with me.
Posted by Waezi2 at 3:15 PM