15 year old Mikado had quite a quiet life in his little hometown, witch he has never left. No vacations, no school-trips, no nothing. So moving into a big city would be a great shock for anyone in his shoes.
But this is not just a big city, no sir! It's one with a mysterious biker, a strong man dressed as bartender, and a head of great importance for many.
Mikado moved to Ikebukuro because he wanted a interesting life. He sure as hell got one!
This is a light-novel series, turned manga, turned anime. And I have to say that I prefer the anime(even though I haven't read the novel yet). Dose that mean that the manga isn't good? Of coarse not.
The manga just tells it's story in a different way. And there is a few hings I believe the manga did better than the anime. For example: In Durarara(or DRRR for short) there is a stalker, but it's in the manga we see how creepy she really is. It starts of with her being irritating as she keeps following the poor guy she has chosen as her target, but then she starts hammering on his door and we see THIS creepy face: 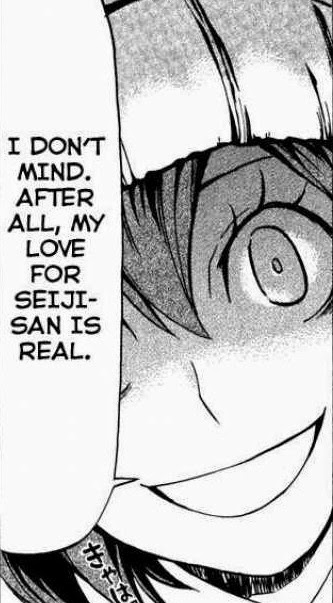 Can you believe that THIS was a kind of cute, but persistent girl a minute ago?
And that is one of the things DRRR does really well; build up the creepiness. There is this scene in the manga where three people are gathered in a room, and we realize, as the conversation goes on, that it's the start of a suicide pact taking form. And that is not even the creepiest part of the conversation.
The art is great too, that also helps building up the creepiness.
There is a lot of colorful characters, like Izaya, the probably most unpleasant manga character ever!
So go get the light novel/manga/anime, and get one very unique experience.
Did I mention that the anime's intro is awesome?